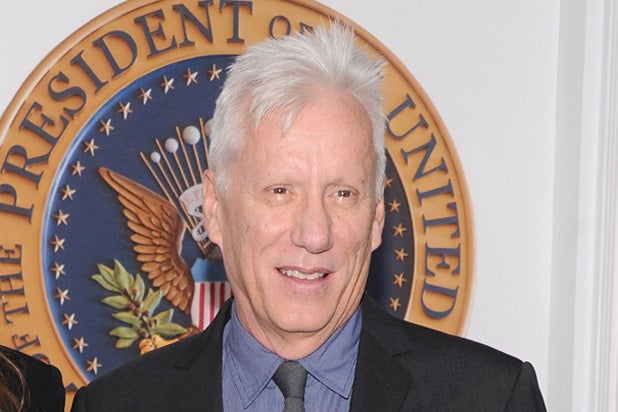 Actor James Woods was locked out of his Twitter account on Sunday for a tweet from July that the site said was in violation of its rules.

According to the Associated Press, Woods was suspended for a July tweet of a satirical meme that encouraged men not to vote in this November’s midterm elections.

The meme came from a hoax campaign with hashtags like #LetWomenDecide and #NoMenMidterms, with Woods admitting in his tweet that the campaign was “not likely” to be authentic. “Pretty scary that there is a distinct possibility this could be real,” he added.

Woods, who has 1.7 million followers for his brand of Hollywood conservatism, told the AP that he received an email from Twitter warning him that the meme “has the potential to be misleading in a way that could impact an election.”

Conservatives quickly decried Twitter’s disciplinary moves against Woods and attacked the social media giant for what they called an attempt to silence non-liberal voices.

Here it is, @jack. Now…what is it about this tweet that made you ban @realJamesWoods? pic.twitter.com/me2A7GiyJn

James Woods in Twitter jail for trying to "impact an election" with misleading information.

But there's no bias against conservatives, honest!https://t.co/eXvVIhwSAO

Hey @jack, unlock @RealJamesWoods account. Stop silencing conservative voices over nothing. It's unAmerican. What does it profit you to win the midterms, if you lose the first principles of the country? #FreeJamesWoods

This is ridiculous. Twitter now officially sucks. I hope it backfires and @RealJamesWoods gains a million more followers. #FreeJamesWoods

Woods, a two-time Oscar nominee for his performances in “Salvador” and “Ghosts of Mississippi,” has seen other sorts of blowback from his active tweeting in favor of President Trump and conservative causes like gun rights.

On July 4, his longtime agent, Ken Kaplan, told him that he would no longer represent him.

Woods has also turned his ire against Twitter itself earlier this year, encouraging followers who owned stock in the website to divest their shares.