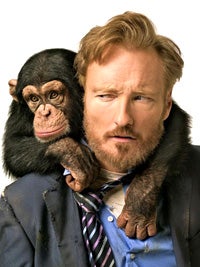 Conan O’Brien released his statement on the late-night fiasco at NBC on Tuesday, and it didn’t take long for the Twitterverse to weigh in with 140-character statements of its own.

And, as you might imagine, the “Tonight Show” host was greeted by overwhelming support on Twitter. According to Mashable.com, the term "conan" was used in more than a staggering 17,000 tweets per hour. (I lodged a few in support of the ginger-haired comedian myself.)

“Team Conan” quickly became a trending topic, along with “Tonight Show,” “Conan” and “Conan O’Brien Says.” “NBC” and “Fox” — the latter thought to be Conan’s only remaining late-night option — were also among the top Twitter trends on Tuesday.

“Jay Leno” was, too, but a vast majority of tweets mentioning him were, um, not exactly nice.

Here are a few of the better tweets I’ve seen:

@denniskneale This kind of salvo from conan o’brien is all but unheard of in TV biz: it all but dares NBC to simply let him go.

@sportsguy33 Superb statement by Conan. Couldn’t have handled this better.

@koblin love conan’s not-so-subtle swipe at Leno: "That would hurt the other NBC franchise that I love, and it would be unfair to Jimmy."

@learmonth Real question is if Jeff Zucker permanently buried the Tonight Show franchise, one of the most lucrative in broadcast TV.

@carr2n Talked to smart flack who said Zucker telling folks that Conan let HIM down by delivering lowly rated show.

@InsideCableNews Man this Conan/Leno/NBC thing is better than any political scandal/bruhaha going on in Washington these days. I can’t get enough of it…

@BrentALang Maybe this was NBC’s plan all along, but I’ve suddenly started watching "The Tonight Show."

@sepinwall NBC has confirmed it’s a new episode with Conan. Well, I know what I’m watching tonight at 11:35

@SteveKrak I joked about it yesterday, but it would be BRILLIANT for Conan to show up, even remotely, on Letterman this week.

@ditzkoff If it wasn’t for Conan, the news that Peter Sarsgaard is in talks to play Hector Hammond in Green Lantern would be HUGE

@williamfleitch Honestly, I’ve been watching Dave the whole time anyway, so no skin off my keister.

@Alyssa_Milano Dear Conan, Good. For. You.

@sarahw No matter how the late night madness shakes off, seems like the big winner is Viking, which has Bill Carter under contract for another book.

@panopticist Conan tells NBC to fuck off: http://bit.ly/4t0d7u One of the great public fuck-yous of all time.

@lindsayism So are we turning our twitter icons orange for Conan or what?

@Clairetastic They really made a mess @MarisaRoffman The Conan situation is insane. No winners. #NBC really screwed this whole thing up.

@pkafka But just to be clear: No one who is Twittering about this stuff watches either Conan or Jay, right?

@azizansari CAN SOMEONE TELL ME WHAT’S GOING ON WITH LOPEZ TONIGHT?? IS IT STILL ON AT 11 ON TBS?!!!