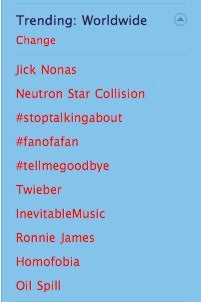 Justin Bieber’s iron grip on Twitter may have finally slipped.

The microblogging service announced a tweak to its trending-topic algorithm that could very well vanquish Bieber, whose name has been ever-present among the 10 most-tweeted terms for many months — whether he’s in the news or not.

Under the header "Recent Trending Topics Improvements" — and anything to effect this change has to be considered an improvement — Twitter said it is "about what is happening right now." In that spirit, the trending topics will identify keywords that are "immediately popular, rather than topics that have been popular for a while or on a daily basis."

Twitter said it’s working on a "most popular" algorithm that it will roll out later.
Of course, "Twieber" was among the midday trending topics on Monday — probably in part because news of the change was spreading.