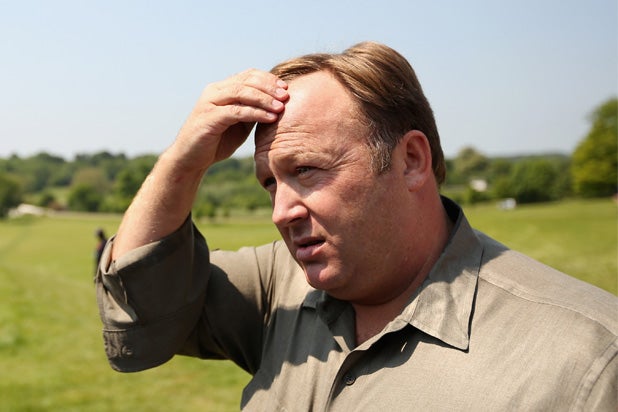 Twitter has no plans to remove Jones from its platform, and a person with direct knowledge of how Twitter is handling the situation said InfoWars is not currently in violation of the company’s policies.

Nonetheless, Twitter’s refusal to kick Jones out has sparked a debate — you guessed it — on Twitter, and the hashtag #BanAlexJones began gaining steam on Monday afternoon, the same day the top Twitter trend for the most part of the day in the U.S. was, more simply, “Alex Jones.”

Here are some of the users calling on Twitter to follow suit with other big tech companies and ban Jones.

Or they can do nothing. Which will devastate all the work Twitter has done to combat hate speech on their platform.

It is unquestionable that banning Milo Yianopoulus from Twitter harmed his career. He’s barely in mainstream media anymore. He lost his platform for shock tactics.

Banning Alex Jones would also affect him. This tactic works.

What are you waiting for @Twitter? Ban Alex Jones.

Twitter won’t ban Alex Jones because outrage is the only thing that drives engagement on the platform.

@twitter What say you Jack Dorsey? Its time for all social platforms to ban hate speech from Alex Jones and his type. If you won't, maybe its time for all of us to delete our accounts. #BoycottTwitter ??? America and the world are watching. https://t.co/cDNXvHAnBT

@Twitter you wanna go ahead and ban Alex Jones InfoWars from this platform too? Aren’t you tired of protecting racist scumbags?

Morning, @jack. Spotify, Apple, Facebook, and YouTube have all banned Alex Jones. In the interest of transparency, which you are fond of telling us is important to you, please tell us why @twitter has not.

Alex Jones has violated policies on hate speech. This is NOT about free speech. His hate towards minorities CANNOT be tolerated. Twitter needs to follow. #BanAlexJones 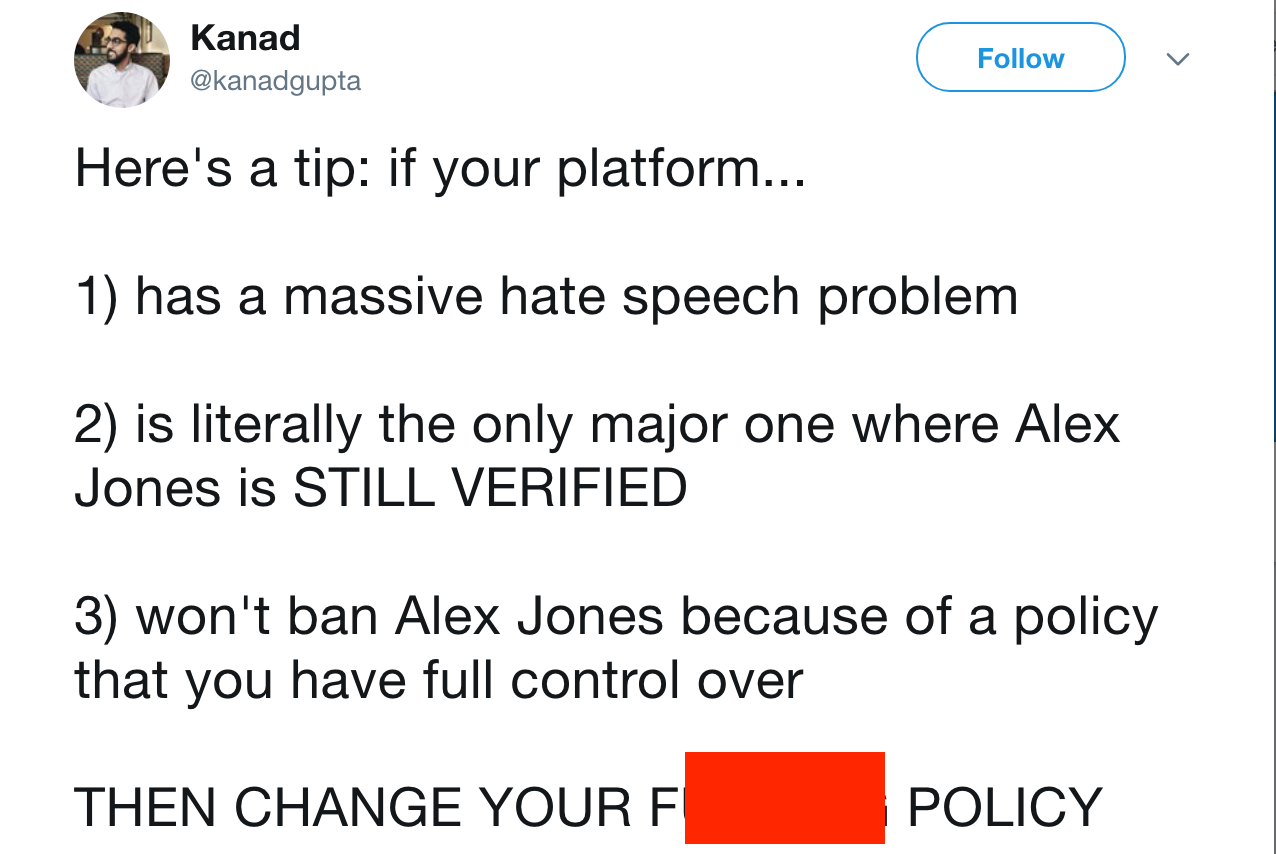 Apple: We have banned Infowars

If I violated the rules of Twitter, Google and/or Facebook because I made vile comments and threats of violence towards the parents of slain children, would the people saying that it is wrong to ban Alex Jones defend me as well? I doubt it — and rightfully so.

I feel like Twitter didn’t ban Alex Jones just so we’d have a place to watch him have a meltdown – or maybe because they’re ok with enabling bigotry. It’s one of the two.

@Twitter IF ALL SOCIAL MEDIA PLATFORMS ARE BANNING #AlexJones WHY MAY I ASK, DO YOU ALLOW @POTUS TO STILL USE YOUR PLATFORM, OTHER THAN YOU ARE MAKING PROFIT OF HIS RACISM AND DIVISION OF THE COUNTRY. #BAN_DONALDTRUMP

Others argued that banning Jones would represent a violation of free speech.

It is wrong to ban him, because banning people is stupid and tyrannical. Free speech means the right to say what those in power don't like, or it's not free speech at all. It's not my place to defend Alex Jones, but I will defend free speech and a free society.

This is not the first time Twitter has been criticized for how it polices content and behavior on its platform. The company has often been rebuked for allowing white supremacists and other perpetrators of hate speech to maintain a presence on the platform — and verifying them as legitimate accounts. But the platform has also caught backlash for its policing, namely, when it temporarily blocked actress Rose McGowan, an accuser and vocal critic of Harvey Weinstein, after she included a phone number in her tweets.