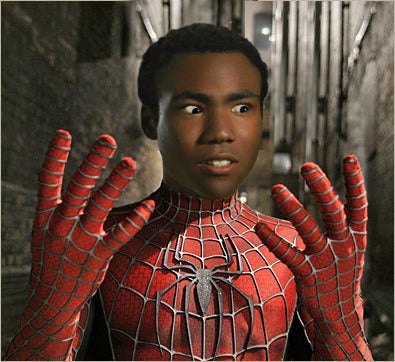 "Community" star Donald Glover wants a chance to audition for Sony’s "Spider-Man" reboot … and judging by the grassroots viral campaigns on Twitter and Facebook supporting the colorblind casting, he’s not alone.

On May 28, in reaction to the news of five white actors reportedly being on the "short-list" to play Peter Parker, Marc Bernardin of io9.com ran a story titled "The Last Thing Spider-Man Should Be Is Another White Guy."

A reader in the comments section suggested Glover as Spidey, and the idea developed a life of its own on the, um, web over the holiday weekend.

It quickly became the third top trending topic in the U.S. for several hours on Twitter.

And another Twitter attack is planned for Tuesday night — this time orchestrated by Glover himself, who plans to have his fans tweet the hashtag at 6:30 p.m. The plan is to make himself a trending topic again, since retweeting doesn’t count for trending.

Said Glover in a tweet over the weekend about the campaign: "Some people are mistaken. I don’t want to just be given the role. I want to be able to audition. I truly love Spider-Man." Neither Glover’s represenatives nor Sony would agree to comment for TheWrap.

So who is Glover, other than Troy on NBC’s "Community"?

The 26 year-old, NYU-educated comedian won an Emmy as a writer on NBC’s "30 Rock," and his comedy troupe, Derrick Comedy, recently released its first feature, "Mystery Team," on DVD and On Demand. More crucially, his comedy videos have become a YouTube sensation, amassing millions of views.

While it’s unlikely that Sony and director Marc Webb would take such a huge creative risk by reinventing the beloved character since they each have a lot riding on this 3D reboot, Glover does have a devoted fanbase that’s roughly the same age as the audience that Sony wants to attract with this teen-centric project.

And Peter Parker is from the ethnically diverse neighborhood of Queens, New York. In fact, there’s nothing in Marvel’s "Spider-Man" comics that dictates that the character must be white.

It couldn’t be worse than Brandon Routh as Superman.