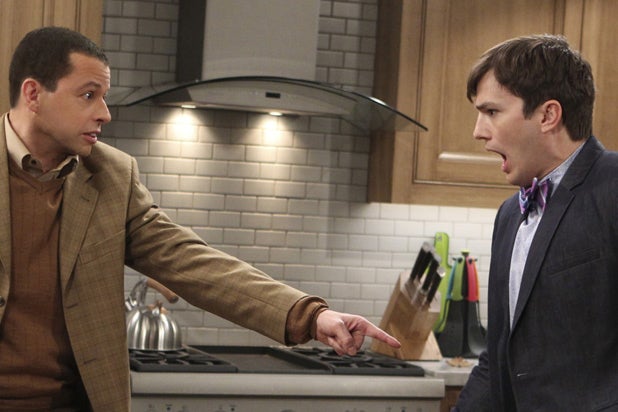 Spoiler Alert: Do not read any further if you don’t want know what happened on Thursday’s series finale of “Two and Half Men.”

Chuck Lorre ended his long-running CBS sitcom “Two and a Half Men” with a hour-long episode filled with surprise guest stars, fourth-wall-breaking meta moments and one big omission.

The question of whether Charlie Sheen would return for a cameo on the series finale of the show that fired him in 2011 was finally answered during the episode, which revolved entirely around the revelation that Sheen’s character, Charlie Harper, didn’t actually die when everyone thought he did.

Turns out, Charlie’s longtime stalker-turned-wife Rose (Melanie Lynsky) had been keeping him in a pit under her house. But when he makes a daring escape and seems out for revenge, Charlie’s brother Alan (Jon Cryer) and his billionaire roommate Walden Scmidt (Ashton Kutcher) scramble for cover.

It all led up to someone who looked like Charlie — but was not played by Sheen — walking up to the front door of his former beach house, ready to confront his enemies, only to be struck down by a baby grand piano. Series creator and EP Lorre was then shown in his director’s chair, turning to the camera and uttering Sheen’s famous catchphrase, “Winning,” before being crushed by a piano himself.

Also Read: The Turbulent Times of ‘Two and a Half Men': 5 Craziest Off-Camera Moments

The episode, which included surprise cameos from Arnold Schwarzenegger as a police detective and John Stamos and Christian Slater as themselves, did welcome back one former cast member: Angus T. Jones, who plays Alan’s son Jake, showed up in the last 15 minutes of the episode for one scene, briefly reuniting with his father before jetting off back to Japan, where he lives with his wife.

The finale was also filled with more self-referential meta jokes than ever, including one joke that included the line “It’s amazing that you’ve made so much money with such stupid jokes” and four characters pausing mid-scene to look directly into the camera.

Also Read: Ashton Kutcher Writes Farewell Note to ‘Two and a Half Men’ Co-Star Jon Cryer: ‘You Are a True Partner’

Earlier in the day, Sheen seemed to have spoiled that he would not cameo during the episode, posting to his Twitter:

If you’re looking for my much anticipated cameo on
network TV,
you’ll have to check out

I go where the love is.

For his part, Lorre explained the reason why Sheen did not make an appearance in a message during the show’s closing vanity card:

I know a lot of you might be disappointed that you didn’t get to see Charlie Sheen in tonight’s finale. For the record he was offered a role. Our idea was to haves him walk up to the front door in the last scene, ring the doorbell, then turn, look directly into the camera and go off on a maniacal rant about the dangers of drug abuse. He would then explain that these dangers only apply to average people. That he was far from average. He was a ninja warrior from Mars. He was invincible.

And then we would drop a piano on him.

We thought it was funny.

Instead, he wanted us to write a heart-warming scene that would set up his return to primetime TV in a new sitcom called The Harpers starring him and Jon Cryer.

We thought that was funny too.