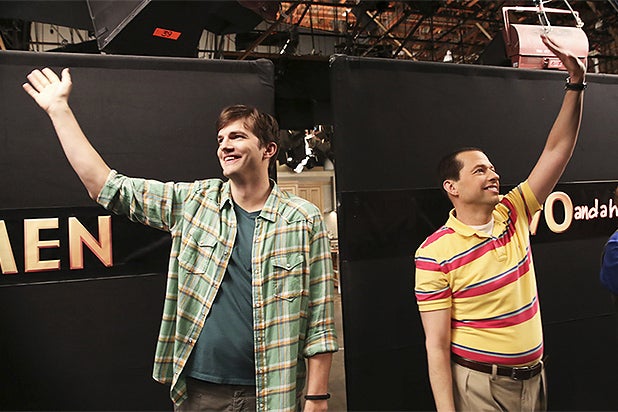 Spoiler Alert: Do not read any further if you don’t want know what happened on Thursday’s series finale of “Two and Half Men.”

The series finale of CBS’ “Two and a Half Men” was met with everything from admiration to derision on social media — a mixed bag which shouldn’t be anything new to the divisive sitcom.

“They ended Two and a Half Men the best possible way,” tweeted @HKeehner.

But others were not as impressed at the way things ended for the Harpers after 12 long years.

“That was the worst sitcom ending ever,” said @sofia_nicole5. “Goodbye two and a half men.”

Much of the online chatter centered around whether Charlie Sheen would return for one last cameo. Spoiler alert: He did not, even as the episode itself revolved entirely around the revelation that Sheen’s character, Charlie Harper, didn’t actually die when everyone thought he did.

“Just watched the two and a half men finale in hopes of seeing @charliesheen but I was let down as I have been with the show since he left!” tweeted @kdali89.

The teases throughout the episode all led up to the final moments, during which someone who looked like Charlie — but was not played by Sheen — walked up to the front door of his former beach house, only to be struck down by a baby grand piano. Series creator and executive producer, Lorre was then shown in his director’s chair, turning to the camera and uttering Sheen’s famous catchphrase, “Winning,” before being crushed by a piano himself.

Also Read: The Turbulent Times of ‘Two and a Half Men': 5 Craziest Off-Camera Moments

TWO AND A HALF MEN was never for me, but gotta say that was a bizarre, funny hour of TV.

We did it, everybody. We survived Two and a Half Men.

two and a half men was still on the air?

Last Two and a Half Men. #EpicFail

holy shit two and a half men ended for good? for real? TODAY IS THE BEST. I LOVE TODAY. TODAY IS LOOKIN UP

Seriously ? That's the end of two and a half men ?

I didn't even know two and a half men was on the air still. Boy, the tv world is really missing out now #SaidNoOneEver

Just watched the two and a half men finale in hopes of seeing @charliesheen but I was let down as I have been with the show since he left!

They ended Two and a Half Men the best possible way.❤️

That was the worst sitcom ending ever. Goodbye two and a half men

Congrats, Two and a Half Men, that was the absolute dumbest ending of a series I've ever seen.

I must commend @charliesheen for being the only actor concerned about making a @TwoAndAHalfMen ending the fans would love. #CharlieSheen

@TwoAndAHalfMen HUGE DISAPPOINTMENT AFTER THE FINALE and I thought It cant turn even worse after charlie left. #ChuckLorreSucks #AwfulFinale

I'm one of the very few people who will say that I am glad Charlie Sheen wasn't in the Two and a Half Men finale.