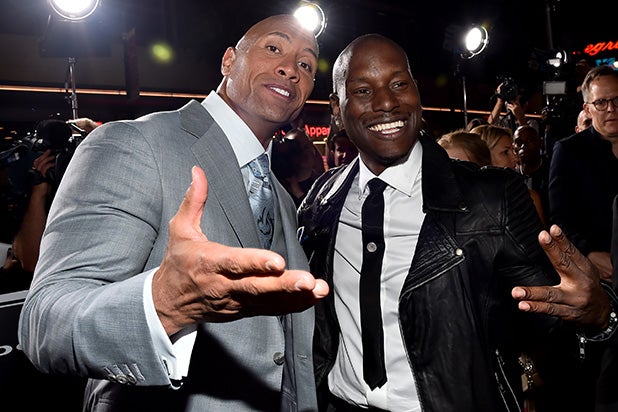 Tyrese Gibson has taken to pleading with his “Fate of the Furious” co-star Dwayne “The Rock” Johnson on social media since the actor apparently hasn’t been returning his messages.

In an Instagram post on Tuesday, Gibson shared a photo of the two of them together and wrote, “I don’t do email bruh. You got my cell same San Diego # hit me,” calling out his co-star for not returning his messages as he had previously done in a series of now-deleted comments on Johnson’s posts.

The public exchange dates back to Sunday when Johnson shared a photo of himself reviewing documents, hinting at a new deal on an unnamed project. Some have speculated, as did Gibson apparently, that the deal was for the long-rumored solo spinoff for Johnson’s “Furious” character Luke Hobbs.

“If you move forward with that #Hobbs Movie you will have purposely ignored the heart to heart moment we had in my sprinter,” Gibson wrote in a comment on the post, which has since been deleted. “I don’t wanna hear from you until you remember what we talked about. I’m on your timeline cause you’re not responding to my texts messages. #FastFamily is just that a family……We don’t fly solo.”

In a longer reply on Tuesday, Gibson explained that Johnson still had not responded to his messages and that his concern was primarily that the spinoff would affect the timeline of the next installment in the franchise.

“I want you to shoot it just not right now cause the #Fast9 release date has already been announced and we can’t let our loyal fans #FastFamily or our loyal fast and furious FANS down on any level from pushing the date,” Gibson wrote.

As TheWrap previously reported, a short “tag” featuring Johnson and Jason Statham was filmed for “Fate of the Furious” to set up the possibility of a spin-off, but producer and co-star Vin Diesel killed plans to add the scene to the very end of the movie.

See Gibson’s post and screenshots of his original comments below: