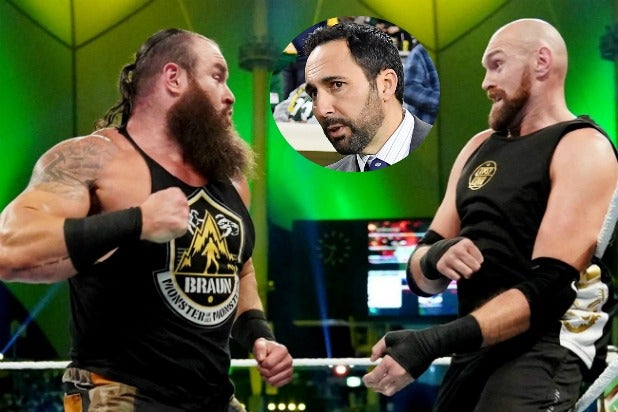 Joe Tessitore will be calling Saturday’s action for Tyson Fury’s very real fight with Deontay Wilder, a rematch of their Dec. 1, 2018 bout that resulted in a draw.

But the “Monday Night Football” play-by-play man and anchor of ESPN’s Top Rank Boxing events, has also been following Fury’s budding fake-fighting career with the WWE. Yeah, the “Holey Moley” guy is a legit WWE fan, and even dropped an unprovoked Undertaker reference on us while we talked Wilder-Fury II. (The reference didn’t make the cut, but Tessitore was talking about Fury shockingly rising from a Round 12 knockdown and boxing until the final bell, saving his undefeated record and lineal championship. It was a good allusion to the WWE Dead Man.)

Tessitore told TheWrap he has “watched every second” of Fury’s brief time with Vince McMahon’s professional wrestling organization, which culminated in a match versus Braun Strowman at Saudi Arabia’s “Crown Jewel” pay-per-view on Halloween 2019.

“I bought the [WWE Crown Jewel] pay-per-view and stayed in my home office, and literally made myself a prosciutto sandwich,” Tessitore said. “I had nothing to do that day. I chilled out, opened a bottle of wine and laughed my ass off and loved it.”

We’ll save you the Googling: Yes, Tessitore is very Italian and very much from Upstate New York.

“I thought he sold the bumps incredibly well the whole time,” Tessitore said of Fury’s scripted work inside the squared circle. “I actually said to myself, ‘Oh my God, he’s got it.’ He’s got that ‘It’ quality. And it’s not you’re taking a bump from just an anybody. It’s somebody who owns the room when he enters the room. Braun owns it. I thought Fury was excellent.”

(Writer’s commentary: Fury’s working punches could use some, well, work. But it’s easier said than done to go back and forth from boxing training to throwing pro-wrestling haymakers.)

Also Read: Tito Ortiz and Alberto Del Rio on Going From Real Punches to Pro-Wrestling Punches - and Back

Promos are as big a part of professional wrestling as the physical aspect. There, the 6’9” “Gypsy King” is already a seasoned veteran, and probably the best in pugilism.

“He’s so good on the mic,” Tessitore said. “If he gets out of [fight No. 2 with Wilder] clean and wins, WrestleMania’s gonna be sick.”

It should be noted here that Fury is not currently being advertised for WrestleMania 36, which will take place April 5, 2020 in Tampa, Fla. At the time of this writing, Fury does not actually have any contracted dates with WWE, a person with knowledge of the situation tells TheWrap — but that could all change after tonight.