Marie-Pierre Delisle had just parked her motorcycle when someone yelled at her to get her hands out of her pockets.

“I didn’t really know what was going on so I just kept going to class,” Delisle, a 19-year-old sophomore at UCLA, told TheWrap. It didn’t take long before she realized what was happening. Delisle was caught in the middle of an active campus shooting.

“I got the text saying ‘we’re on lockdown,'” she told TheWrap. “It was a pretty scary situation.”

It was a scene of chaos as a shooter stormed one of UCLA’s buildings in Westwood, California, a little after 10 a.m. PT on Wednesday. The campus was immediately put on lockdown as SWAT teams and bomb squads took over the area.

As helicopters swarmed the skies above, a UCLA administrator urged students to hide behind bushes, instructing them to “zig-zag” their way to safety.

By the time the LAPD pronounced the incident over around 12 p.m. local time, two men were killed in an apparent murder-suicide. According to authorities, a gun was found along with what might be a suicide note. Engineering professor William S. Klug, 39, was later identified as the victim.

The shooting occurred in a small office in an engineering building, exactly one floor above Delisle and her classmates.

“It was pretty close,” Delisle said. “It was pretty much silent in the room, it was pitch black. Some people had the news on just listening to it, but really it was just [from] fear I guess. [We were] just trying to stay calm in that type of situation.”

Delisle spent the next two hours hiding from the gunman and hoping he wouldn’t notice her and her classmates.

“I just tried to get in between two chair rows and try to be hidden from view,” Delisle recalled, wiping tears off her face.

Once the all-clear came, students emerged with their hands in the air as police patted them down one by one searching their pockets and backpacks for weapons. 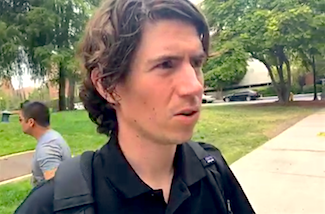 Delisle’s brother, Guillaume de Zwirek, who works in nearby Beverly Hills, rushed to the campus as soon as he heard about the shooting. He spent the entire time trying to calm her down through the lockdown, texting her updates on the latest developments happening outside.

“I [came] to get her information and to get her out of here when she gets out,” he told TheWrap, his hands shaking as he frantically texted his sister.

Asked what they talked about during the two-hour nightmare, Delisle said, “I was just telling him that I was still in lockdown and the lights were out and that there was nothing I could do. I was more asking him for updates,” adding that she was “just really thankful that he was here so that now I feel safe with him.”

Watch Delisle describe the terrifying scene in her own words in the video above.