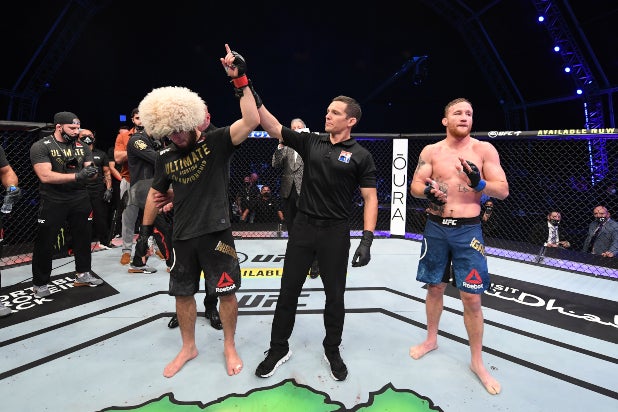 Khabib Nurmagomedov defeated Justin Gaethje Saturday night at UFC 254, continuing an impressive unbeaten streak for the Russian fighter. Then he announced his retirement.

“Today, I want to say this was my last fight,” Nurmagomedov said during a post-match interview in front of a nearly empty Flash Forum in Abu Dhabi. “No way am I going to come here without my father. It was the first time.”

His father, Abdulmanap Nurmagomedov, died earlier this year from COVID-19 complications. Nurmagomedov had revealed his mother asked him to fight without his father in his corner. “I promised her this was going to be my last fight,” Nurmagomedov continued. “If I give my word, I have to follow this.”

Nurmagomedov ends his fighting career with an overall 42-0 record, including 13-0 in UFC competition. It was the MMA organization’s longest active unbeaten streak. He broke his foot three weeks ago, making his second-round victory even more impressive.

“What this guy has been through, we’re all lucky that we got to see him fight tonight,” UFC chief Dana White said. “So he has two broken toes and a bone in his foot that’s broken or something like that. That’s what his corner was telling me. Never told anybody, walking around. I mean he is one of the toughest human beings on the planet.”

"This is my last fight."@TeamKhabib pays his respects following a dominant performance at #UFC254 pic.twitter.com/5HiUvJXBJC

Dana White solidifies @TeamKhabib in the goat discussion after hearing about his broken foot coming into this fight.