UltraViolet, a feminist advocacy group, called on advertisers like Mercedes-Benz, American Express and Bloomingdales to sever ties with the New York Post on Friday after it published a false story about Vice President Kamala Harris’ book being given to migrant kids as part of “welcome kits.”

In a statement on Friday, UltraViolet’s communications director, Bridget Todd, accused the tabloid of publishing a “deliberate lie … in the service of a partisan political agenda.”

“Let’s be frank about it: The New York Post paid a writer to knowingly publish a false story in an attempt to defame the first woman to serve as Vice President. While this isn’t entirely shocking given that the paper is owned by the Murdoch family, the same group of people that allow Fox News to spread bigoted and racist propaganda night after night. It is alarming that major brands continue to give the paper credibility and financial support by advertising with it,” Todd said. 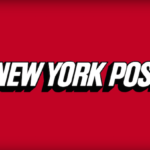 Todd said that past Post advertisers like Mercedes-Benz, American Express and Bloomingdales “must take a stand against the intentional spread of lies.”

“We urge them to issue public statements refusing to be associated with the New York Post going forward, and for them to commit to never advertising with the paper again,” Todd said. 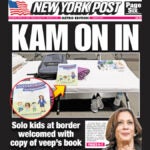 Last Friday, the Post published a since-retracted piece that said migrant children at a shelter in Long Beach, California, were being given a copy of Harris’ book, “Superheroes Are Everywhere,” as part of “welcome kits.” The piece was promoted on the Post’s Saturday cover and promoted by Fox News and prominent Republicans.

By Tuesday, after other outlets fact-checked the story and found that only one copy of the book was donated to the shelter as part of a city-wide donation drive, the piece was taken offline briefly before a heavily edited version was republished in its place that included this editor’s note: “The original version of this article said migrant kids were getting Harris’ book in a welcome kit, but has been updated to note that only one known copy of the book was given to a child.”

That same day, the reporter who had written the story, Laura Italiano, said she had been “ordered to write” the inaccurate story and had handed in her resignation.

On Friday, the Post belatedly responded to Italiano’s assertions and denied that she was made to “deliberately publish factually inaccurate information.”

“The New York Post does not order reporters to deliberately publish factually inaccurate information,” the paper said in a statement. “In this case, the story was amended as soon as it came to the editors’ attention that it was inaccurate.”