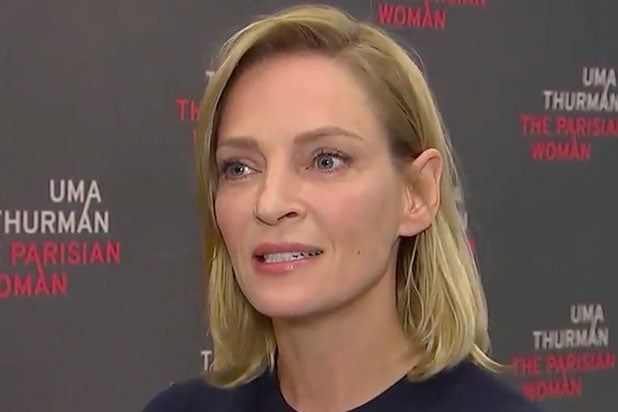 Uma Thurman gave a chilling response when she was asked on the red carpet about the flood of sexual misconduct allegations made against various men in the entertainment industry.

“I don’t have a tidy soundbite for you, because — I have learned — I am not a child and I have learned that… when I’ve spoken in anger, I usually regret the way I express myself,” she said, carefully choosing her words in a recent “Access Hollywood” interview. “So I’ve been waiting to feel less angry… and when I’m ready, I’ll say what I have to say.”

Thurman has worked with Harvey Weinstein — who has been accused of sexual misconduct including harassment and rape by more than 90 women — on various films including the “Kill Bill” movies and  “Pulp Fiction.”

Thurman also starred in “Beautiful Girls” and “Burnt,” two films that were distributed by Weinstein-owned companies.

Weinstein is currently facing criminal investigations by police in London, New York, Los Angeles and Beverly Hills. On Friday, the New York Police Department said it has “an actual case” against the producer, and they are gathering evidence to issue an arrest warrant.

The NYPD made the statement just one day after actress Paz de la Huerta said that the disgraced Hollywood mogul raped her twice. The “Boardwalk Empire” star told Vanity Fair’s Rebecca Keegan that on both occasions their sex “wasn’t consensual,” and that the producer had “stuck himself inside me.”

A representative for Weinstein has stated, “Any allegations of non-consensual sex are unequivocally denied by Mr. Weinstein.”

Uma Thurman's response when asked about the flood of sexual misconduct allegations….wow. pic.twitter.com/Sw5Br1GwFg