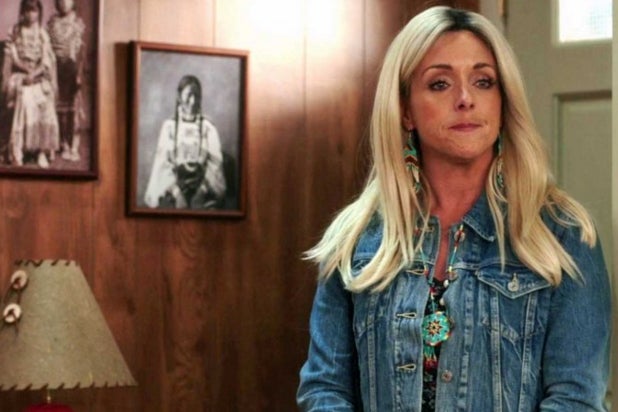 On “Unbreakable Kimmy Schmidt,” the very Caucasian Jane Krakowski plays Native American Jackie Lynn, who long ago broke from her tribe’s reservation for the bright lights of New York City, becoming Jacqueline Voorhees. The character is so blonde-haired/blue-eyed that her maiden name is “White.”

At the end of Season 1 and beginning of Season 2, the show’s writers got a lot of mileage out of American Indian jokes after the wealthy Manhattanite went home to find herself. In the process, she took out her blue-colored contacts, quit dying her roots, and donned a ton of turquoise jewelry. Some viewers cried foul over the resulting stereotype-based quips, while others pointed out that most of the punchlines are at the expense of the very obviously white woman.

With a weekend’s worth of Season 2 public reactions to reflect on, series co-creator Robert Carlock explained his and Tina Fey‘s intentions to TheWrap — and they’re certainly “not to offend,” he said.

“I prefer to let the episodes speak for themselves,” Carlock began. “Our intention is not to offend — our intention is to be part of an important conversation.”

“I completely understand that for some people there are litmus tests — there’s an either/or. There are some things that you’re just not allowed to do,” he added. “We don’t think that’s true. And we don’t think we’re doing the thing from a context and story point of view that those litmus tests were invented for.”

Season 2 of “Unbreakable Kimmy Schmidt” is available in its entirety on Netflix. More from our interview with Carlock will be posted tomorrow.