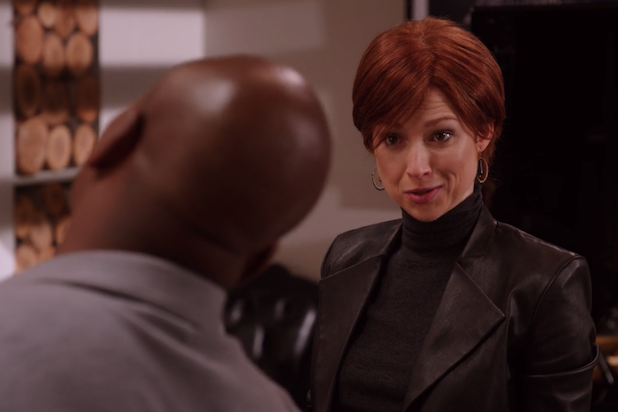 (Warning: This post contains spoilers for the final season of “Unbreakable Kimmy Schmidt”)

“Unbreakable Kimmy Schmidt” modeled one of its final six episodes after the plot of the 1998 Gwyneth Paltrow flick “Sliding Doors,” and appropriately titled it “Sliding Van Doors.”

At 53 minutes, the episode clocked in as the longest of the Tina Fey-created series, and takes fans into an alternate universe where Kimmy (Ellie Kemper) was never kidnapped by Reverend Richard Wayne Gary Wayne (Jon Hamm) and Titus (Tituss Burgess) stopped off in Durnsville, Indiana, while on his way to New York after running away from his wedding.

The two end up running into each other at a showing of “Sliding Doors” — a movie they never got around to seeing in the real timeline — and that chance encounter and their reaction to the film affects how they lead the rest of their lives, taking them down very different paths and turning them into a very different Kimmy and Titus than the ones we know today.

Titus is obsessed with fame and joins a Scientology-like organization in New York to help him reach A-list status. Kimmy, meanwhile, plans to move to London after college, but a freak accident at graduation results in her falling into a year-long coma. When she regains consciousness, she’s unable to travel abroad as she intended, but she marries her high school sweetheart, becoming Kimmy Schmidt-Pigslinger. She starts a career as a local news anchor, who turns out to be, well, let’s just say not as nice as our Kimmy. And then her husband cheats on her with Donna Maria — who also didn’t get kidnapped in this timeline.

Kemper told TheWrap the episode “was so much fun, because the choices the characters made did change.”

“I sort of struggled with that at first, because I thought, ‘Well, just because someone makes a different decision in their life doesn’t mean their personality fundamentally change,'” she continued. “And it was really cool to see. I think Kimmy was a little bit rougher in that scenario. I don’t know if she lost any sense of her tenacity and iron will, but it did feel like the experience that she did actually have may have shaped her in a better way unexpectedly.”

Things are also different for Jacqueline (Jane Krakowski), who ends up married to Mikey (who is, obviously, you know, still gay) and Lillian (Carole Kane) who becomes a drug lord in East Dogmouth.

Somehow all of this leads to Kimmy and Titus meeting in New York, getting a sham marriage so the now-famous Titus has a beard and remains closeted, and the two moving to London — where a cliffhanger implies they are about to be murdered by a serial killer.

Kemper isn’t actually sure how the whole “Sliding Doors” concept slid into the show, but she is “very happy it did occur to the writers.”

“I remember [showrunner] Robert Carlock mentioning something about it, like, ‘We have this crazy idea to do this ‘Sliding Doors’ episode where we see what would have happened if the characters had made different choices,'” she said. “It’s such a good idea for an episode and very different from most of the episodes that we’ve done. And it was cool from an actor standpoint because we all got to play kind of different characters, which was just a nice challenge and a nice departure from what we’re used to doing.”