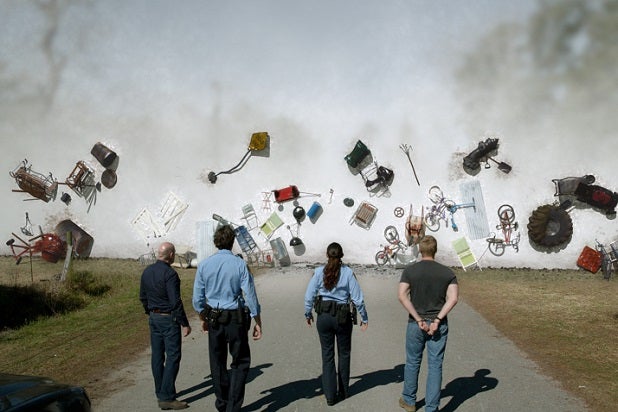 CBS’s Stephen King adaptation “Under the Dome” was a strong summer hit with its first season last year. But where do you go with the second season of a series that’s by definition reined in by a huge invisible barrier?

Series executive producer Neal Baer was on hand with cast members Dean Norris and Rachelle Lefevre at CBS’s inaugural press junket on Monday to answer questions about where things will go for the second run of the drama, which begins June 30.

Short answer: Prepare yourself for death — and a gentler Big Jim (portrayed by Norris).

A preview clip from the upcoming season was punctuated by the untimely death of one of the characters — and Baer noted that there’s another big demise coming. But death doesn’t have to equal farewell, Baer noted.

“That doesn’t mean that we won’t necessarily see them again, because anything is possible under the dome,” Baer teased cryptically.

Another seemingly improbable development for the upcoming season: the mellowing of Norris’ James “Big Jim” Rennie.

Informed by one reporter that his character was a “son of a bitch” in the first season, Norris noted, “I think part of the transformation theme that we’re talking about this year includes some redemption for Big Jim.” Citing a “come to dome” moment on Jim’s part, Norris added, “he comes to an awakening and he reevaluates his position and his personal trajectory.”

During the panel, Baer also reflected on working with Stephen King, who wrote the script for the premiere and briefly appears in the episode.

“I just got an email from him today, and he’s so supportive. He actually has a cameo in the first episode … He’s very fun to be with, and he was in North Carolina doing a lot of press when we first started shooting in March. He has great ideas. As I said, I just love the idea that refrigerators and stoves becoming our enemy,” Baer said.

“The writers love that he’s involved; he reads every script, as does [executive producer] Steven Spielberg, too,” Baer added.

Baer also cited a struggle between science and faith in the upcoming season, with the introduction of cast member Karla Crome, who’ll play a schoolteacher who injects a more scientific discussion of the dome’s effects into play.

See a new photo from the “Under the Dome” Season 2 teaser above.