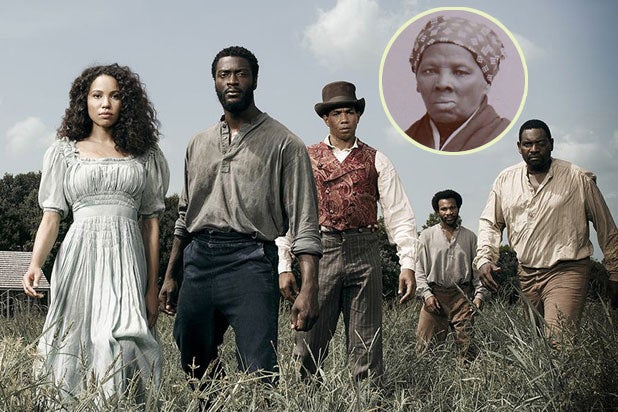 With the news that Harriet Tubman will replace Andrew Jackson on the $20 bill, the cast and creators of WGN America’s Underground Railroad series “Underground” could not be happier.

“We’ve always said the show ‘Underground’ is about American heroes, so to finally have not only a woman but a black woman on a monetary bill is fantastic,” co-creator Misha Green told TheWrap.

“We use money all the time. We’re used to seeing these faces of these white males and now we’re excited that we’re starting to represent our actual history,” co-creator Joe Pokaski added.

“[From] now on I demand to be paid in $20’s!!!” series star Aldis Hodge said on Instagram. “This is huuuuge. I think of the resounding effect of how many hands one $bill touches in a day and think of how many people will see her face and acknowledge her story. Times are changing.”

Jurnee Smollett-Bell was also ecstatic over the news. “I’m doing my happy dance today! Harriet Tubman will be on the $20 dollar bill! If our Ancestors could see us now!” she said on Twitter.

And while they couldn’t confirm when or where, the show’s creators did say that Tubman will make an appearance on “Underground” at some point. “When she will arrive, I don’t know, but you can’t tell the story of the Underground Railroad without her,” Green said.

Politico reported that Treasury Secretary Jack Lew will announce on Wednesday that Tubman, a famous abolitionist and Underground Railroad conductor, will grace the front of the $20 bill, marking the first appearance of a black person on U.S. currency and the only the second such appearance of a woman on its paper currency.

In addition to Tubman replacing Andrew Jackson on the front of the $20 bill, changes to the backs of some bills will also be implemented.

Last summer, Lew announced that a woman would most likely replace Hamilton on the $10 bill, but the success of Lin-Manuel Miranda‘s hit Broadway musical “Hamilton,” which won a Pulitzer Prize for best drama on Monday, unexpectedly created a fan base for the founding father who served as the first Treasury secretary.