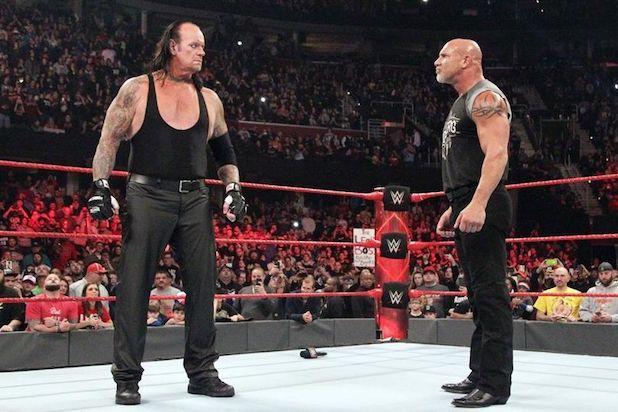 The Undertaker is 54-years-old. Bill Goldberg is 52. So naturally, the two young wrestlers main-evented “WWE Super Showdown” in Saudi Arabia on Friday.

You can probably see where this is going. The Jeddah event’s final match was an absolute disaster filled with botched moves — some of which could have caused serious injury to the two legends.

But don’t take our word for how bad the highly touted first-time-ever bout was — the WWE Universe on Twitter is already calling Goldberg-Undertaker “the worst match of the year,” among other very un-superlative superlatives.

Find a small sample of the loud online booing below.

>When WWE wants to replay the finish of Goldberg v Undertaker at #WWESSD pic.twitter.com/n9WjPZH7xc

A botched Jackhammer followed by a botched kick out. Let. The. Greats. Retire. #WWESSD

How many of these matches can Undertaker come back for? Imagine that was his last match? When is it going to be enough? The End Of An Era match with Triple H Hell In A Cell at Wrestlemania should have been it. Streak intact. This is fucking sad. Simply awful #WWESSD

We leave you with this, goodnight everybody. #WWESSD

That was painful. It's sad to watch. Taker should have stayed retired. #WWESSD

Goldberg vs Taker was honestly just depressing to watch. I don't want to see two of my childhood heroes almost kill themselves in a ring. Never again. Please. #WWESSD

Taker vs Goldberg was full of botches

Why so Goldberg's leg up when Taker ain't holding it??? pic.twitter.com/IXlouxS4Wb

And below are some of the more dangerous botches during the match.

First, readers can see Goldberg not being properly protected by Undertaker on his Tombstone Piledriver.

Goldberg returned the non-favor by dropping Undertaker early with a botched Jackhammer.

No, I’m serious. This is scary ???? pic.twitter.com/KD2yVQfiyO

Also Read: WWE Legend Shawn Michaels Is a Bad Dad - and in a Ton of Danger - in '90 Feet From Home' Trailer (Exclusive Video)

Goldberg’s head appeared to be bleeding a bit before he even walked through the curtain and down the entrance ramp. Viewers of the WWE Network pay-per-view event could hear a loud thud from inside Goldberg’s dressing room when security went to retrieve the WCW icon.

Goldberg is already bleeding before the match against Undertaker begins. Sounds like he headbutted the door. #WWESSD pic.twitter.com/GIWtVRGnxf

After flying head-first into the ring post early on in the match, Goldberg’s head began to gush more profusely. The unprotected piledriver certainly did not help.

At 3am Saturday Saudi time, Goldberg gave an update on his condition, tweeting, “Knocked myself out and thought I could finish…. love my fans…..but let u down.”

Knocked myself out and thought I could finish…. love my fans…..but let u down. Everyone else that found “pleasure” ….. hope ur happy

Judging by the internet reaction, it seems more than just his fans were let down.