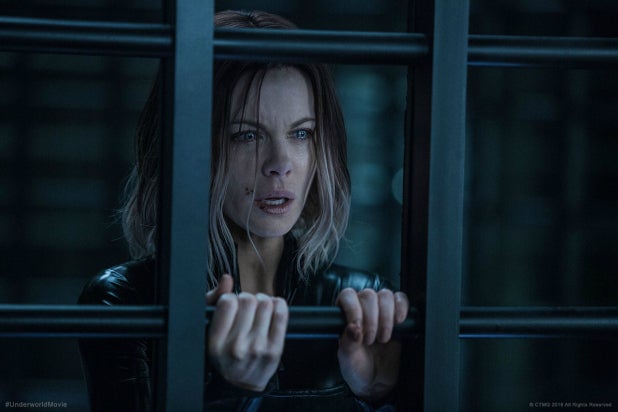 What’s the point of a movie about the vampire-werewolf war if it’s going to be fought with machine guns? That’s a question that’s never quite answered in “Underworld: Blood Wars,” the latest entry in a very silly franchise that’s proving to be as immortal as its protagonists. (The first forgettable film in the series surfaced back in 2003.)

If you want to see leading lady Kate Beckinsale slink around in a series of pleather catsuits, occasionally accented with fur and/or weaponry of all kind, then there’s no doubt plenty here for your delectation. Those looking for chills, excitement, competent fight sequences or anything resembling characterization should probably avoid any non-2016-Oscar-qualifying movie whose poster says “January” on it.

The last of these slinky-stupid supernatural epics opened five years ago, so we begin with Beckinsale narrating a for-those-just-joining-us opening that brings us up to speed with blood-sucking “death dealer” Selene (Beckinsale), the Vampire covens and their on-going fight with the Lycans, Selene’s messianic child whose blood could end the war (we’re told this about ten times before “Blood Wars” is out), and so on and so on and whatever.

David (Theo James, “Divergent”) pops up early on to lend a hand to Selene, who’s being hunted by both vampires and Lycans; before long, they’re summoned back to the European coven of vamps to train the troops for an impending attack by Lycan leader Marius (Tobias Menzies, “Outlander”), who’s obsessed with finding Selene’s long-lost daughter. Newly elected vampire council member Semira (Lara Pulver, “Da Vinci’s Demons”) has lobbied for Selene’s help, but she’s actually got a hidden agenda.

And then comes a lot of “and then,” with various double-crosses and secret pacts, none of which turn out to be all that interesting. Selene and David flee to a far-off Nordic coven — as though this series needed an excuse to go further into the ice-blue color palette — to seek refuge amongst a passel of white-haired, pale pacifist vampires, and there’s more plot to endure before the machine guns come out.

Director Anna Foerster (a TV vet making her big screen debut) and screenwriter Cory Goodman (“The Last Witch Hunter”) aren’t utterly bereft of ideas; there are a solid five or six “hey, that was cool” moments, including Beckinsale sliding across the ice on her knees and using a sword to brake and do a 180 turn. But for the most part, there’s little to care about: Semira surfaces as the one potential source of campy fun in the film (“Don’t think; you’ll hurt yourself,” she tells her long-suffering paramour), but she’s quickly ground down by the story machinations, and the fight scenes are so choppily edited that they barely register at all.

(If you get bored, and you will, keep track of how many times people say the words “blood” or “war.” The latter is usually referred to as “this war,” which the characters utter with the dolefulness of someone in a Tyler Perry movie saying “these streets.”)

James is a handsome blank, as usual, although one has to admire the speed in which the film gets him out of his shirt. And then there’s Beckinsale, whose extraordinary turn in last year’s “Love & Friendship” was a potent reminder of her skills as an actress when a movie bothers to give her anything to play. Selene seems ready to put this story behind her for most of “Underworld: Blood Wars,” and it’s hard not to wish that for Beckinsale, as well.