Yesterday a friend and I had a meeting in the Valley. I arrived before he did, so I decided to sit outside and wait since it was such a beautiful day. As I sat in the sun, I saw a women chatting with a gentleman a few feet away. I thought I recognized her, but was not sure.

I saw my friend approaching, so I got up and walked toward him. As I passed the woman, I got a good look and realized I was looking at Sarah Palin. I hugged my friend and we turned to walk into the building. I then stopped, turned around, and walked back toward her.

Let me begin by saying that Sarah Palin is beautiful. Not just pretty, but beautiful. She has great hair, fabulous teeth, magnificent skin and a killer body. She is tiny, feminine and stunning. She is very approachable, so I decided to introduce myself, and say hello.

She was standing there with Mark Burnett, who I think is fabulous. We all know I am a reality television junkie, and think he is King, but I was so blown away by how much fun she was to talk to that I barely said hello to a man who I think totally rocks. Note to self for next time: Never give up an opportunity to talk to Mark Burnett.

To clarify, I don’t agree with Palin’s politics. We are polar opposites in terms of our political and religious views.

That said, her politics and beliefs have nothing to do with my blog. This is America and she can believe what she wants, as can everyone else, myself included.

I approached her because I like her as a woman. We are both ballsy ladies, and both mothers.

I introduced myself and told her that I thought she was entertaining on "The Tonight Show With Jay Leno" the night before. I don’t actually watch Leno, and never will again, but I had seen a ton of clips online. Sidebar: Jay Leno is a baby, and a putz, and I hope Conan has sweet success and revenge.

So anyway, I told her that I think she is a hoot, and while we are very different in our political views, I think she is a great broad, and I would enjoy hanging out with her. I love her as a woman, which is hard for people who feel strongly about her politics to understand.

She asked me what my name was, what I did for a living, what my deal was in general. I told her about my kid, my blog and my search for love. She asked for the link to my blog so she could read it, and mentioned that her sister was also in her 40s, single and looking for love. 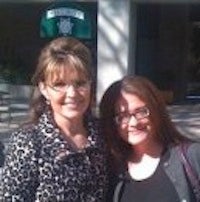 We spoke about how hard it is to be single, and she could relate because her sister is in the same boat. I wonder what is harder to do: Find a nice Jewish guy who isn’t looking for a Barbie in Los Angeles, or find a nice guy in Wasilla, Alaska, where everyone knows everyone? Both are small pools, but I think my chances are slimmer.

In speaking with her, I quickly forgot who she was in terms of her work and what she stands for, and was able to see her as just another woman. It was like being with a girlfriend. She was funny and engaging.

I must tell you, I liked her. At the risk of sounding too Californian, she has a good energy, and she made me feel instantly comfortable.

We talked about glasses and purses. I asked her if we could take a picture and she was lovely. Someone from her group took the picture, and as he was getting the phone ready, I told her I normally take off my glasses for pictures, and she said, “Don’t you dare!” It was a great moment.

She wished me well, gave me a hug and told me she would look at the blog and pass the link on to her sister. To her sister Molly McCann, hello! Your sister is fantastic, and looking out for you. We need to compare notes about being single and the struggles to meet good, decent men.

My encounter with Ms. Palin was unexpected, and very enlightening.

Women have a lovely connection to each other. We may not have the same experiences, or viewpoints, but we can relate to each other. Parallels can be drawn between most women, even on the smallest of levels. It is a sisterhood that is understood and embraced.

We get caught up a lot in religion and politics. I know I do, and am quite opinionated about my point of view.

At the end of the day, however, I just liked her.

We could not be more opposite in terms of our beliefs and politics, but she is a great lady, and nobody can take that away from her. While I won’t be voting for her, ever, she has my admiration as a woman and as a mother.

So Ms. Palin, apart from being annoyed that you are so skinny, pretty, funny and have a yummy husband, I dug you, and it was a pleasure to meet you. I’m sending good wishes to Molly that she meets her Prince Charming. For you and your family, my son, myself, the troops and for America, I will continue to keep the faith.