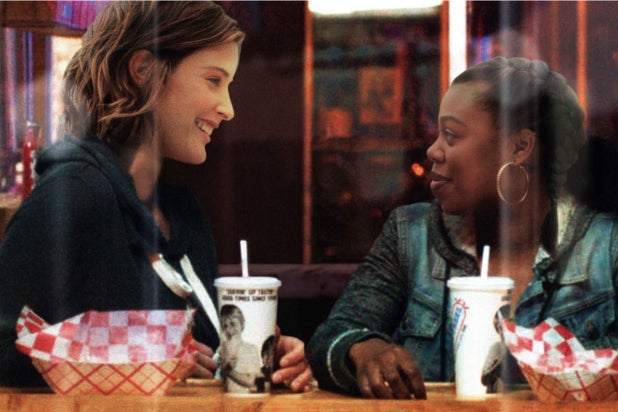 Pregnancy and motherhood may be experiences most women share, but you probably don’t need a fractious mommy blog to tell you that these states of being also emphasize differences of race, class, sexuality, education, life phase, personal history and relationship status among females of childbearing age.

Kris Swanberg’s “Unexpected” dives into that cleave between women who might otherwise appear to be two pregnant peas in a pod. A white high-school teacher (Cobie Smulders) at a predominantly black school in inner-city Chicago finds herself with child at the same time as one of her best students (Gail Bean). Science instructor Samantha pushes Jasmine, a hardworking senior, to attend the same college she did, baby on the way or no.

At home, Samantha agonizes over how to “have it all” – to balance the demands of new motherhood with a fulfilling career, especially given her school’s imminent closure at the end of the academic year – while Jasmine wrestles with much more immediate worries, like how to get enough food assistance to eat for two and sussing out whether keeping her layabout boyfriend (Aaron J. Nelson) around is worth the trouble.

The low-key, capably crafted drama boasts some moderate, if narrowly appealing, ambitions. Swanberg and co-writer Megan Mercier elevate women’s concerns about compromising their personal goals and satisfaction with the needs of a child by making those issues the film’s thematic crux. Samantha’s deep ambivalence toward her unborn child and Swanberg’s slight eroticization of her protagonist’s pregnant figure are refreshing in a mainstream entertainment culture that tends to simultaneously deify and de-sexualize expecting women. The socio-cultural contrasts between Samantha and Jasmine also feel important: The two might bond at their prenatal yoga class, but motherhood means a professional hurdle for the educated white woman and another person to love (if also an obstacle to higher education) for the underprivileged black girl.

Also Read: 'Avengers: Age of Ultron' Star Cobie Smulders Says She Got Dressed for the Premiere in Her Car (Video)

In execution, though, “Unexpected” is a well-intentioned snooze. We see Samantha reading pregnancy books, being annoyed at her mother (Elizabeth McGovern) and husband (Anders Holm), and googling meet-ups for stay-at-home moms, in case she decides to become one. If such scenes are supposed to add verisimilitude, they only succeed in making the film as dull as real life. The script’s high point for adrenaline is when Samantha and Jasmine make the impulsive decision to – wait for it – litter.

Samantha’s gentle insistence that Jasmine follow in her footsteps eventually leads to pushback from the teen, who resents being made to feel like her teacher’s charity case. Once again, there’s a valuable message about how the first step in helping someone should be asking them what they want instead of imposing what you think they need.

But the film undercuts its own aims to speak across racial and class barriers by focusing so heavily on Samantha, whose woes are fairly familiar, and so scantly on Jasmine, whose struggles are both underrepresented and actually urgent. True-to-life details like the daycare facility at Samantha and Jasmine’s school for its teenage students remain scarce. The reliably fantastic Smulders is the much bigger star here, of course, but Bean is a find, too, and deserves more screen time than what she’s allotted.

Initially pregnant with possibility, “Unexpected” is ultimately a squandered opportunity.