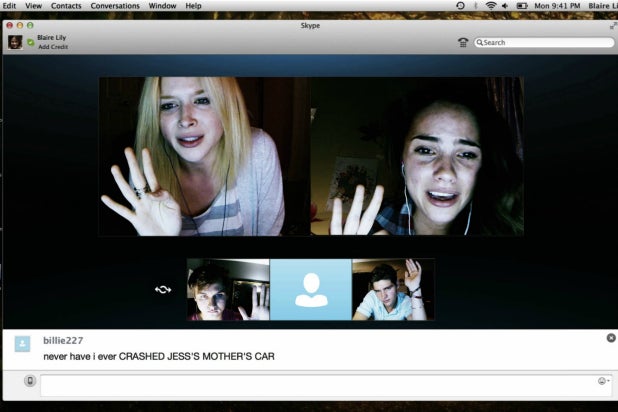 Directors and cinematographers lament the fact that they work hard on creating exquisite shots and camera set-ups for movies and TV shows that most people will wind up watching on a laptop. So perhaps it was inevitable that we get to “Unfriended,” the first major motion picture apparently designed to be seen on a computer.

The film’s gimmick — and it’s an effective one — is to tell a story of supernatural vengeance entirely on one computer screen where a group of friends has assembled in a collective Skype chat. Before the end of the evening, gruesome deaths will become image memes and a Spotify playlist will assume the role of a guilty conscience.

There’s no denying that this is all a little ridiculous, but “Unfriended” commits to its idea and continually finds new ways to creatively exploit it, building the tension as each character reveals his or her own dark deeds, thus justifying the brutal vendettas visited upon them. We’ve seen the locked-room mystery; now it’s time for the chat-room revenge tragedy.

The film opens on Blaire (Shelley Hennig, “Ouija”) clicking on pages related to the suicide of classmate Laura Barns one year earlier; Blaire’s boyfriend Mitch (Moses Storm) Skypes her, and the two have a flirty back-and-forth before pals Jess (Renee Olstead, “The Secret Life of the American Teenager”), Adam (Will Peltz, “Men, Women & Children”) and Ken (Jacob Wysocki, “Pitch Perfect”) come bounding into their conversation.

There’s a sixth person on the call, with no name and no photo, and while they originally assume it’s some sort of glitch, the phantom stranger persists, even after they loop in Val (Courtney Halverson, “True Detective”). Blaire starts getting mysterious messages from Laura’s old Facebook page, and it soon becomes evident that the mystery hanger-on is Laura herself, here to torment the old “friends” who posted an embarrassing YouTube clip that pushed her to end her own life.

Developed by Timur Bekmambetov (“Abraham Lincoln: Vampire Hunter”), written by Nelson Greaves and directed by Russian filmmaker Leo Gabriadze, “Unfriended” has a canny sense of how computers have become, for most of us, a conduit to the world. When a pull-down menu on Facebook is missing the “Unfriend” command, or when a Gmail has no “Forward” option, the audience immediately knows that there’s something amiss. That annoying spinning-beach-ball icon has never seemed as horrifyingly portentous.

On paper, the idea of an entire real-time movie set in a Skype conversation seems like it would work only as a short subject, if at all, but “Unfriended” keeps upping its own ante, cluing us in that the traditional plot solutions — calling the police, running security software — will do no good against Laura and her righteous wrath. The filmmakers also get plenty of mileage out of that creepy pixilation effect that happens during live video chat.

“Unfriended” is neither as silly as it might look nor as terrifying as its “Titus Andronicus”-via-Mark-Zuckerberg set-up promises, but it takes a high-concept yet bare-bones premise and milks it for all the jolts it can. It has the same bargain-basement chill appeal as the first “Paranormal Activity” — but please, no sequels. “Unfriended” makes its online-terror premise work, but there’s nothing left for version 2.0.