Universal Pictures is the Indominus Rex of the 2015 domestic box office.

Thanks to the year’s top-grossing movie “Jurassic World” and the hottest box office streak in Hollywood history, the studio has won the 2015 domestic market share title with $2.43 billion — 21.6 percent of the overall total — as of Wednesday.

Runner-up Disney, which made a late charge with “Stars Wars: The Force Awakens,” finished at $2.16 billion, or 19.2 percent. J.J. Abrams‘ sci-fi adventure has obliterated nearly every record in its path and last weekend became the studios’s second film to top the $1 billion mark globally, after Marvel’s “Avengers: Age of Ultron.”

“We had great filmmaking partners who gave us a diverse slate that was marketed superbly and with great timing,” Nick Carpou, in his first year as president of Universal Pictures’ domestic distribution, told TheWrap. 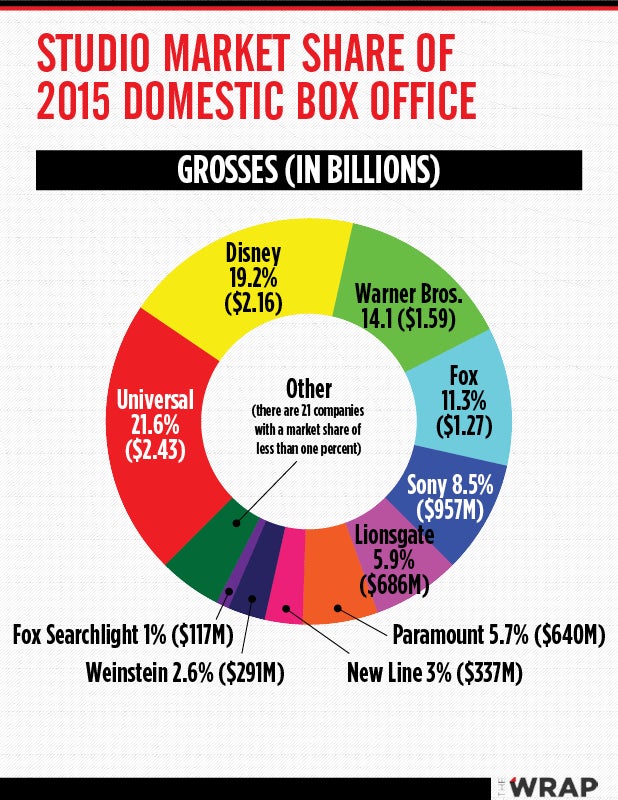 During its streak, which started in February, Universal had six films open No. 1 at the domestic box office: “Fifty Shades of Grey,” “Furious 7,” “Pitch Perfect 2,” “Jurassic World,” “Minions” and “Straight Outta Compton.” In all, it had 14 No.1 weekends, more than any other studio.

Universal finished fifth last year, so this is remarkable turnaround for the studio and the best in its 103-year history.

The studio began the turnaround following the appointment of Jeff Shell as chairman of Universal Filmed Entertainment by NBC/Universal CEO Steve Burke in 2013.

Chairman Donna Langley heads Universal Pictures and Ron Meyer, president of Universal Studios for 18 years before he segued into the role of vice chairman of NBCUniversal, helps Shell and Langley run the studio.

“That we had Universal with their incredible year and Disney bringing ‘Star Wars’ back at the same time is really remarkable,” said Exhibitor Relations media analyst Jeff Bock. “I hope people were paying attention, because we won’t see a year like this again soon.”

Here’s how the rest of the market share broke down: