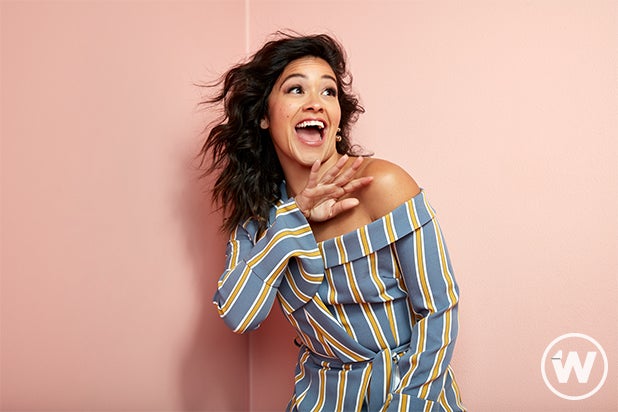 Universal Pictures has acquired an original comedy pitch from Jessica St. Clair and Lennon Parham, the creators behind USA Network’s “Playing House.” Universal is setting the project up as a starring vehicle for “Jane the Virgin” star Gina Rodriguez.

The studio is keeping the plot and details of the untitled comedy under wraps at the moment. But along with penning the script, St. Clair and Parham will serve as executive producers.

Rodriguez got her star-defining role in 2014 as Jane Villanueva on The CW’s hit show “Jane the Virgin.” Rodriguez plays the daughter of a teen mother, determined not to repeat her mom’s mistakes, until she’s accidentally inseminated — and sperm donor is her boss.

Since then, Rodriguez has starred in films such as “Deepwater Horizon,” and alongside Natalie Portman in Alex Garland’s sci-fi horror film “Annihilation.” She has lent her voice to characters in animated films “The Star,” “Ferdinand” and the upcoming “Smallfoot,” in which she plays Kolka.

Rodriguez is starring in Catherine Hardwicke’s remake of the Oscar-nominated Mexican drug drama “Miss Bala,” about a beauty contest winner who is forced to work for a crime boss after she witnesses a murder. That film is due out next year.

In March it was announced that next year Rodriguez will star in a Netflix film adaptation of the famed “Carmen Sandiego” educational series.

Rodriguez will also produce the feature-length film through her I Can And I Will banner alongside Kevin Misher and Caroline Fraser, with Andy Berman as executive producer. Rodriguez had already been signed by Netflix to play Carmen in an animated series that will also hit the streaming service next year.

Universal executive vice president Erik Baiers will oversee their project for the studio.

St. Clair and Parham are repped by UTA, Rise Management and Morris Yorn Barnes; Rodriguez is represented by CAA and Jackoway Austen Tyerman.