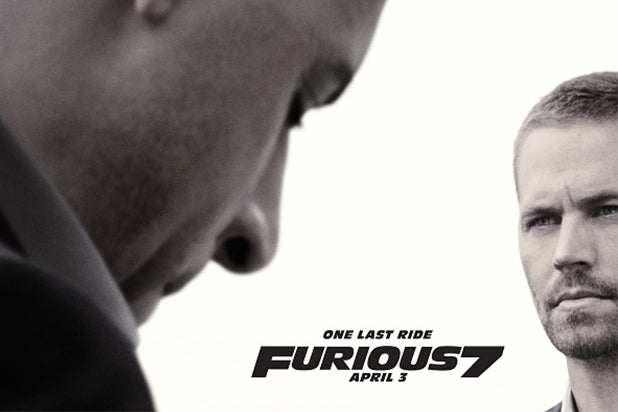 The weekend’s box office opening numbers — $143 million domestically and $240 overseas for the action sequel – speak for themselves. But the studio was forced to walk a fine line with the film’s promotion, after Walker died in a car cash while shooting “Furious 7” in November 2013.

“Restrained but effective” was how the campaign was characterized by one industry marketing executive, who like most of the people interviewed for this story chose to remain anonymous. “They didn’t lean on it, but they touched on it,” said another industry insider.

Universal executives had declined to address the subject before the film came out, but on Sunday at least one spoke for the first time.

“I can tell you personally that I’m very proud of the way the studio and marketing department walked us through what otherwise would have been a very tricky situation,” Universal’s president of domestic distribution Nick Carpou told TheWrap.

“They handled everything that had to do with Paul respectfully and positively, and what emerged is more respect and a celebration of Paul and the franchise to the world. For the production team, Vin (Diesel) and the rest of the cast this was a matter of personal importance and that shows through.”

The challenge was to serve the star’s fans without seeming exploitative or disrespectful.

“I think from the very moment of Walker’s tragic passing, Universal did a masterful job of honoring his memory and respecting his legacy, while at the same time going about the business of marketing one of the biggest movies on their slate,” he said. “Furious 7” which was shifted from its original August 2014 release date in the wake of his death.

“It takes a tremendous amount of sensitivity and diplomacy to walk the perfect public relations tightrope whenever something unexpectedly tragic like this happens, Dergarabedian said.

“There was clearly a lot of thought that went into the handling of this and how Walker is portrayed not only in the the trailers and imagery for the film, but also how he is represented in a very poignant and respectful way within the film itself,” he said.

Walker died in November 2013, with about half of his scenes shots. His brothers Caleb and Cody stood in for him in some, and others were reconstructed using computer-generated images.

The “Fast and Furious” fan base likes to think of itself as a family, and nothing put that to the test like Walker’s death. In that spirit, many of the followers of the franchise first fought through the tragedy, then embraced Walker’s legacy and celebrated it, framing their attendance at “Furious 7” as a tribute to the fallen star.

Walker’s friend and co-star Diesel and other cast members set the tone in person and on social media, repeatedly citing their “brother,” and making sure that his contributions weren’t forgotten. They rarely passed on tough questions about their loss, and did their best to spin it forward into an homage to his memory.

At the film’s premiere in Hollywood, Diesel gave a tearful speech, saying “This movie is more than a movie… I’m going to tell you, last year it was really tough to come back to work.”

The film’s “One Last Ride” catch phrase can be taken as a tribute to Walker, particularly with the somber and and almost stark black-and-white imagery utilized in the promo art for the movie.

“Furious 7” concludes with a clip montage tribute to Walker, showcasing scenes from earlier films in the series, that had many moviegoers leaving the theater in tears.