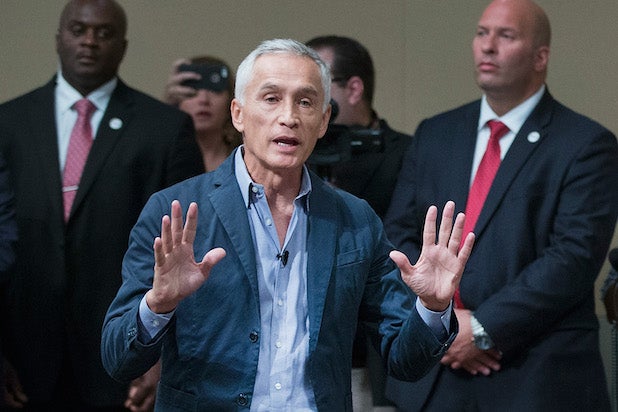 On Monday, Univision anchor Jorge Ramos and his crew were “arbitrarily detained” at the Miraflores Palace in Caracas after Venezuelan President Nicolas Maduro ended an interview because he was “very upset with the line of questioning.” They were released shortly after, and interview materials Maduro objected to were not returned.

“Jorge Ramos and the Univision crew have been released,” Univision said in a statement provided to TheWrap. “Their equipment, cellphones and the interview material was confiscated in another attack to freedom of press.”

Ramos and his crew flew to Caracas on Sunday for a Monday interview with the Venezuelan president, which was set for 2:30 p.m. ET. After it was postponed twice, the interview began around 7 p.m.

A few minutes into the interview, Maduro became “very upset” with the questions, according to network spokesman Jose Zamora. “He stopped the interview and confiscated the equipment,” Zamora told TheWrap.

Zamora said that Ramos, a veteran journalist, then called Univision to tell them what had happened.

“That’s when they took away his phone,” Zamora added.

The network said it’s been in touch with the U.S. State Department and the U.S. Embassy in Colombia, as well as special representative Elliott Abrams in Venezuela. The exact status and location of Ramos and the crew is still unclear.

“They are trying to figure it out and get them out,” Zamora said.

“We insist on their immediate release,” she tweeted, “the world is watching.”

At least four people were killed and hundreds more were injured over the weekend after Maduro forces blocked shipments of humanitarian aid from entering the country.

Attention: A @Univision team, headed by @jorgeramosnews, is being arbitrarily detained at the Miraflores Palace in Caracas. They were interviewing @NicolasMaduro but he didn't like the questions. Their technical equipment was also confiscated. https://t.co/c45tB0E4er

.@StateDept has received word the journalist @jorgeramosnews and his team are being held against their will at Miraflores Palace by Nicolas Maduro. We insist on their immediate release; the world is watching. #Venezuela