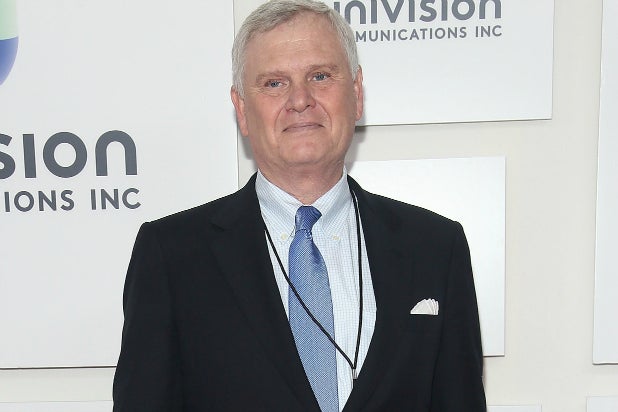 We expected this exact transition to occur. Below are the requisite quotes about the outgoing and incoming chief executive officers, and underneath those our story from last week about Univision’s imminent naming of Sadusky as Falco’s successor.

Haim Saban, chairman of the Board of Directors of UCI, said the following: “Over the last eight years, Randy has led the transformation of UCI into a modern media organization with a diverse portfolio of assets, sterling brands and content that audiences and marketers want, backed by strong earnings growth, a significantly improved balance sheet and a team of motivated and purpose-driven employees. Randy has always recognized and embraced Univision as an incredibly unique company with a mission and vision that goes well beyond traditional media. On behalf of the entire Board, I want to thank Randy for his leadership, commitment and partnership, and congratulate him on his retirement.”

“Leading UCI has been one of the most personally and professionally rewarding experiences of my life,” Falco said. “So much has changed – and will continue to change – in the media landscape but through it all one thing remains true: no other media company serves and supports Hispanic America like UCI, something that is more important than ever in our world today. I believe wholeheartedly in UCI’s mission and vision and am confident that the Company will remain on a path for continued success with Vince leading the way.”

On his new guy, Saban said: “Vince is distinctly qualified to lead UCI through the next phase of its growth, given his impressive track record of leadership, vision, deep industry experience and relationships. This is a unique moment for UCI, and we believe that we have the right strategy and team in place to execute on the opportunities in front of us. On behalf of the entire Board, we look forward to working with Vince to achieve great success for UCI.”

“It’s an honor and privilege to have the opportunity to serve as CEO of UCI, a company I have long admired for its important mission to serve as a lifeline and advocate for its community, and the strong bonds it has built with its audience,” Sadusky commented. “I am eager to work with UCI’s talented team to enhance the Company’s leadership position and underscore its crucial role as a source of news and information. Over the last few months, UCI has taken a number of steps to evolve and thrive in today’s rapidly changing media environment and I am committed to ensuring the Company is in the best position possible to serve its audiences for decades to come.”

Previously, on the morning of May 23:
Univision is set to name former Telemundo executive Vince Sadusky as Randy Falco’s replacement at the CEO position, according to Bloomberg.

Until last year, Sadusky was chief executive officer of Media General Inc. He previously had a long run as the chief financial officer (CFO) at Univision rival Telemundo.

In March, Falco announced his plans to retire by the end of 2018. Though he’ll be 65 years old when walking away, Falco had just signed a two-year contract extension four months earlier. At the time, the Wall Street Journal reported that the Univision board of directors was considering ousting Falco, something Chairman Haim Saban denied.

Univision, which has been feeling TV ratings pressure from key competition Telemundo, laid off a few hundred employees thus far this year. A person with knowledge of the company’s ongoing audit told TheWrap last month that more layoffs are likely to come amid continued restructuring.