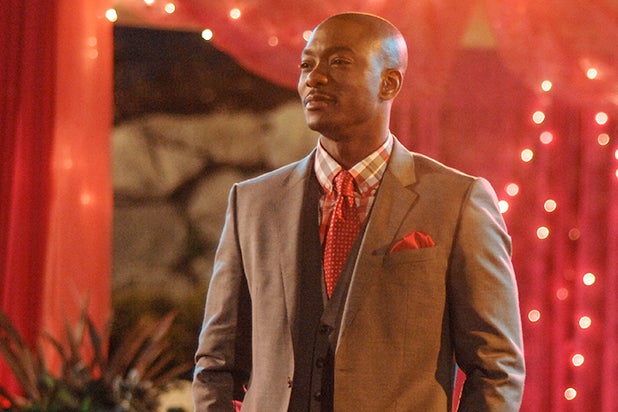 Before “The Bachelor” has managed to lock down a black Bachelor or Bachelorette, Lifetime’s darkly funny parody of ABC’s dating reality show is doing just that.

B.J. Britt plays Darius Hill, “Everlasting’s” first black suitor, on Season 2 of “UnReal,” while Rachel (Shiri Appleby) and Quinn (Constance Zimmer), the producers of the show-within-a-show, do everything they can to make the most of their history-making moment.

Having the first black suitor on “Everlasting” — a none-too-veiled stand-in for “The Bachelor” — means stepping into a potential mine field of sensitive political issues surrounding race, gender and modern-day media.

“It’s a really, really hard thing to do right,” showrunner Sarah Gertrude Shapiro told TheWrap. “Our room was already diverse, but we’re taking a lot of care in trying to tell this story really well, so making a lot of space for those voices to represent their point of view and their experience in life, uninterrupted.”

Below, Shapiro and fellow showrunner Marti Noxon explain how the Season 2 writers room prepared to tackle such a sensitive topic, and how all the most uncomfortable and personal discussions that came out of the room ended up on screen.

You’re telling the “first black suitor” story, and you mentioned during the show’s TCA panel a few months ago that you were seeking out male writers in order to tell the male characters’ story, which is also being played up this year. Did you seek out diverse writers in order to tell this story?
Sarah Gertrude Shapiro: We did. We made a lot of time for them to just talk about what it is to be a black woman, what it is to be a black woman dating, and just taking a lot of care in trying to do it as well as we can. It’s a really, really hard thing to do right.

Marti Noxon: The other part of the story is that it’s about limited knowledge, and our desire to show what it’s like to see something as a commodity. Right now, after “Empire,” there’s sort of the idea that the black experience is a commodity. We can’t know. We can have a black woman or black man or people on our staff but we can’t know. The truth is we can’t know.

If we’re the deciders, we’re talking about the narrative. I hope that comes out in the show, which is, we’re speaking for people. We’re deciding. We’re deciding this is important or that is important, and no matter who has a voice, we’re saying… We want that to be part of the story, which is, we hired this guy on the show because we think it’s good money. We think it’s good story.

How does that color the actual story, how does that change the story because we are the people shaping the narrative? For me, it’s all good intentions, that’s the path to insanity, because we really, really don’t know. We keep trying but the truth is we can’t have that experience. So part of the dynamic of the story of this season is, “We’re trying to be good people, and we’re doing this, but the truth is, really, we want good ratings.” It’s not the truth of the show itself –

Shapiro: No, we’re putting that in Quinn’s mouth [onscreen], because she sort of talks about that at one point. For me, it’s been the most fascinating discussion on race I’ve ever been a part of. Just saying to the women of color in our room, you just talk and we’re not going to interrupt and you just keep talking. It’s going to get really weird and really hard. And there’s been some really awkward lunches, but we push through it.

As a group, we all decided this was something we wanted to do. For me personally, in the limited weeks that we’ve had, I really am finding myself, as I’m reading news stories, or reacting to people on the street, I’m having a different experience with race, having gone through this process with the room.

Noxon: But one black woman does not the truth make.

Shapiro: Right, of course not.

Noxon: So to me, we can educate ourselves as much as we want, but we can’t walk in that person’s skin.

Shapiro: Which is what the show is about this season too.

Also Read: 'Bachelor' Vet on the Lack of Black Bachelors: 'You Have to Be Pragmatic'

So it sounds like there is going to be some art imitating life, life imitating art in Season 2.
Shapiro: For sure. The show gets so meta we can’t even keep track of it. We’re just like, “Wait, did I just say that or is Quinn saying it?” And I think that’s really relevant, it’s an important part of “UnReal,” it’s to be as honest about ourselves as we are harsh on everyone else. The other option is to shut up and not talk about it and wait for someone else to do it, but I think we should just go ahead and try.

Noxon: As complicated as it is, as messy as it is, just wade in.