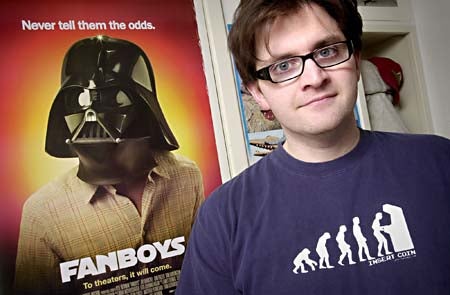 (Update: 6/19 4 p.m. PST: AICN reports that Warner Bros. and "Green Lantern" producer Donald De Line have won the bidding war for the rights to Ernie Cline's debut novel "Ready Player One," and that Cline has been hired to write the first three drafts of the screenplay.)

Another young-adult novel is causing a stir.

As Deadline reported Thursday night, Farah Films & Management's Dan Farah is shopping the film rights to Ernie Cline's upcoming "Ready Player One." But the story didn't mention who the interested buyers are.

What's more, Farah is negotiating with both Paramount and Warner Bros. for the hot title, with several other studios preparing bids for later this afternoon.

Random House reportedly gave first-time-novelist Cline a mid-six figure advance for the domestic rights to the project, and international rights are currently being auctioned off in a heated bidding war.

Described as a cross between "Charlie and the Chocolate Factory" and "TRON," the book follows a teenager in the 2040s named Wade Watts who likes to escape his bleak surroundings by logging into Oasis, a globally networked virtual utopia where users lead idyllic alternate lives.

When the game's eccentric billionaire creator dies, he offers up his fortune as the prize in an elaborate treasure hunt. Wade is pitted against powerful corporate foes and ruthless competitors who'll do anything, in the Oasis and the real world, to reach the treasure first.

Cline previously wrote "Fanboys" for the Weinstein Co. and has also written "Thundercade," a comedy about an aging videogame junkie who sets out with two of his best pals to take on the teenager who broke his high score on a videogame.