UPDATED on Monday at 11 am with David White’s response.

The consulting company belonging to the Screen Actors Guild’s new national executive director, David White, shut down shortly before he was hired because of his ties to a New York lawyer accused of a $380 million fraud scheme, Marc Dreier.

Dreier, who remains under house arrest in Manhattan, was arrested on December 7. White’s company Entertainment Strategies Group appears to have ceased operations that month.

A SAG official said that the guild was aware of this connection when White was hired.

But the new national executive director was not vetted until last Saturday at a board meeting, according to one member who was present but declined to be identified. White’s $400,000 contract was approved by a majority of the SAG board on Saturday.

White, a former general counsel at SAG, was hired precipitously by the guild on January 26 in the wake of the ouster of national executive director Doug Allen. 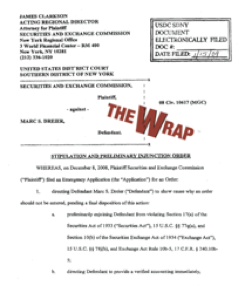 According to documents filed by the Securities and Exchange Commission 11 days before White’s appointment, his consulting company Entertainment Strategies Group is among 10 companies that were “in whole or in part, or controlled by, related to, or associated or affiliated with” Dreier.

Brown Woods George and Pitta & Giblin, the firm that represented SAG president Alan Rosenberg and Co. in its defunct suit to impede Doug Allen’s firing, are also among the ten companies associated with Dreier. Dreier’s assets have been frozen, including his interests in the affiliated businesses such as White’s.

White’s connection to Dreier does not mean that he was involved in any alleged fraud with the lawyer. But the timing of the closing of ESG, so near to White’s overnight hiring in the wake of Allen’s ouster, suggests that it might be something SAG members may have wanted to know.

White sent the following statement to TheWrap about his ties to Dreier, noting that he disclosed the tie before his engagement at SAG :

"ESG was a consulting firm established to help lawyers, talent representatives, producers and other entertainment industry professionals who struggle with the complexities of collective bargaining agreements.

"In addition to responding openly to questions asked about ESG and its investor, Marc Dreier, during the most recent Hollywood Board meeting, I shared this and other information about ESG with the National Board of Directors prior to its approval of my employment contract.   ESG has ceased operations and I am focused on my job at SAG, which certainly requires all of my attention.’"

Asked why SAG had not publicly disclosed this information about White, SAG spokeswoman Pam Greenwalt declined to comment.

The board member who was at the closed executive session said the board did not have the opportunity to question White about his involvement with Dreier – or about a list of ESG’s clients, which included the MPAA.

White was not present at the meeting, though members of Membership First asked he be brought in for vetting. Instead opposing SAG factions debated how long the vetting should go on.

Former SAG president Richard Masur proposed the board question him for 15 minutes, but Membership First found 15 minutes to be unacceptable. Time ran out to approve Masur’s proposal and, according to new board rules, voting had to take place.

“We were denied the opportunity to do a full vetting of [White’s] business and his link to Dreier,” the board member told TheWrap. “We saw [ESG’s client list] as a huge conflict of interest.”

The process of vetting usually takes a day, the board member said. “[Robert] Pisano took a day and a half. Steve Diamond took a full day. We go through the contract without the candidate in the room, then would have an all day Q&A with the candidate.”

Another board member said that the board did not have a problem with White’s association with Dreier. “It doesn’t imply that David did anything shady,” said that member.

Two SAG members who called ESG in recent weeks told TheWrap that the business was still running as recently as two weeks ago. The group’s website has since been taken down.

Rank and file guild members have long criticized the guild for its lack of transparency and communication.

White declined to comment to TheWrap for this article, but he has gone on record about his involvement with Dreier.

In an article published a week after Dreier’s Dec. 7 arrest, White explained to the National Law Journal that Dreier was a “passive investor” in ESG and received a percentage of the company’s profits, but was “not involved in the operations at all.” 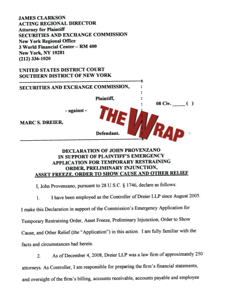 White said he was in the dark about Dreier’s backdoor dealings, as were hundreds of others who worked for the companies implicated in his schemes. “It’s pretty safe to say that anybody who was involved in any way, with this guy, either as a passive investor or any other way, was pretty shocked and outraged by the events that are unfolding.” He added that has ESG’s attorneys will investigate how Dreier’s charges could impact the company.

But according to John Provenzano, former controller of Dreier LLP, Dreier was more than a “passive investor” in the 10 companies. In fact, he might have paid White and Weaver’s salaries. In a declaration forwarded to TheWrap, Provenzano said the companies deposited their profits into an account over which Dreier shared control. In exchange, Dreier would pay each of the “partners” or “principals” fixed salaries and predetermined bonuses.