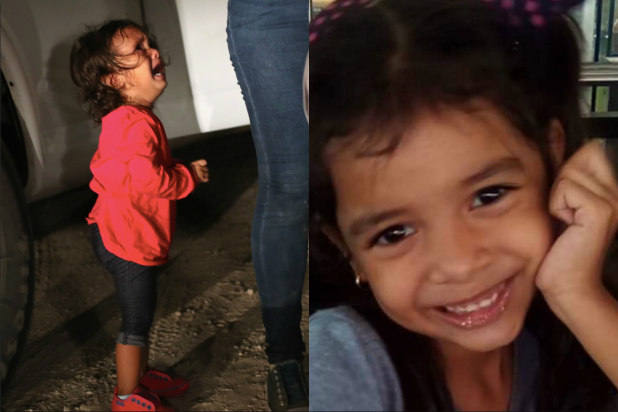 As backlash over President Trump’s zero tolerance immigration polices continue reverberate in the national consciousness, the identifies of two young girls, whose stories have become a central part of the narrative this week, were revealed.

On Friday, Daily Mail reporter Karen Ruiz identified Yanela Sanchez as the Honduran girl, whose crying image at the border went viral across the world this week and even graced the cover of Time Magazine.

More surprising still, Ruiz, who spoke to Sanchez’s father, said the family had never been separated.

“I spoke to the father of the little Honduran girl photographed crying at the border,” said Ruiz. “He says he has yet to speak to his wife and daughter but reveals they were never separated and are ‘safe'”

I spoke to the father of the little Honduran girl photographed crying at the border. He says he has yet to speak to his wife and daughter but reveals they were never separated and are 'safe' https://t.co/SkZ7VHKlqc

Indeed as the Daily Caller reported Friday, the family was not escaping violence and the girl’s mother Sandra had previously been denied access to the United States and took her child with her on a second attempt over the objections of her husband, Denis Javier Varela.

Time Magazine subsequently issued a correction to their cover story, which suggested young Yanela had been separated.

“The original version of this story misstated what happened to the girl in the photo after she taken from the scene. The girl was not carried away screaming by U.S. Border Patrol agents; her mother picked her up and the two were taken away together,” Time’s correction read.

Another girl from El Salvador, six-year-old Alison Jimena Valencia Madrid, was able to escape a maze of immigration bureaucracy and connect with her mother after memorizing a phone number for an aunt.

Alison Jimena Valencia Madrid was separated from her family and held in a detention center more than 1,200 miles away from family, but was picked up on audio repeating the phone number of an aunt. Ginger Thompson, a ProPublica reporter, managed to get ahold of the aunt and bring Jimena into contact with her family by phone.

Breaking: Jimena spoke to her mother! She cried through the entire call, asking her mom when they were going to be together again. I suspect hearing her mother’s voice for the first time after being so traumatically torn apart brought the pain rushing back. This is Zero Tolerance

You can read the full account from ProPublica here.