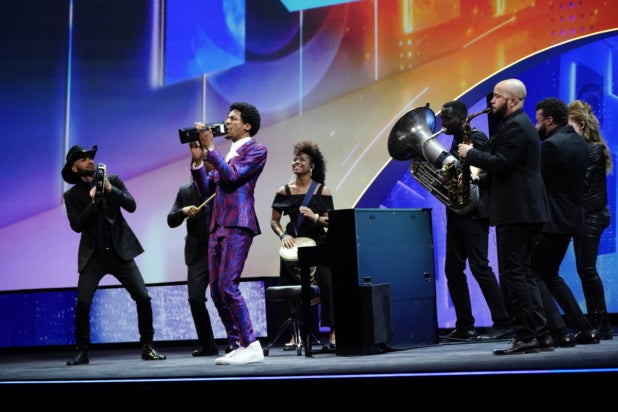 If you strip away all the glitz, glamour, buzzy new show trailers and jokes from this long week of upfront presentations, what you’ll see is a bunch of network executives simply trying to keep their heads above water in this ever-changing TV industry.

In fact, it may have been ESPN’s Kenny Mayne who unintentionally spouted out what many in the TV industry could use as their mantra: “I don’t know how the hell we’re going to do it, but I’ll be working on it.”

Faced with declining linear television ratings (NBC, thanks to the Super Bowl and Winter Olympics, was the only network that saw any improvement this season in the advertiser-coveted 18-49 demographic) and no end in sight to cord-cutting, network chiefs spent the past week trying to put advertiser fears at rest.

But at least there is one thing that both advertisers and media companies can agree on: The way TV audiences are measured has to change.

“I still cannot believe I have to get up on this stage and talk about legacy measurement,” said Linda Yaccarino, chairman, advertising sales and client partnerships, NBCUniversal, during the company’s presentation at Radio City Music Hall on Monday morning. “Aren’t we all tired of letting inertia rule our industry?”

But changing the way an entire industry has done business for decades can feel like trying to steer the Titanic away from that iceberg. They have to hope they turned the wheel early enough.

“Let’s stop trying to measure everything using Nielsen. We’re so beyond that,” Barry Lowenthal, president of ad agency, The Media Kitchen, told TheWrap this week. “We measured exposure because we couldn’t do anything better than that.”

Nielsen has tried to include viewing on non-TV platforms with its Total Audience Delivery, but that measurement has so far failed to catch on with buyers and sellers. That has lead to the networks trying to come up with an answer themselves.

“The audience is there, we’re just simply not measuring them,” Kevin Reilly, Turner Entertainment Networks chief operating officer, argued to reporters following Turner’s upfront on Wednesday. “If you want to reach an audience on TV, which still is highly effective, nobody would debate it. What’s not effective is this measurement.”

Although there has been a push towards “audience-based” buying, the majority of TV advertising is still purchased against Nielsen’s C3 metric, which measures how many viewers were tuned into the program during the commercial breaks, for up to three days after the broadcast. Yaccarino noted it was 11 years ago that the decision was made to use C3 as the main currency, back when “we used flip phones.”

But another media buyer told TheWrap that the solution shouldn’t be left exclusively to those doing the selling. “While some acknowledged the measurement is broken, not sure the rhetoric or solutions being showcased by the sellers is the answer,” said Shari Cohen, executive director of media investments for Mindshare.

The advent of streaming networks like Netflix and Hulu have trained viewers to expect fewer commercials, or none at all. That has had a domino effect on linear TV. Turner was among the first media companies that decided to cut back on the number of commercials it airs, and since then other networks like NBC and Fox have followed suit.

Fox unveiled its new plan for cutting back ad loads this season, introducing its new “JAZ Pods.” While that sounds like incomprehensible ad jargon, it simply means that for some of its shows, the commercial breaks will only have two ads, just the “A” and “Z” slots that run next to the actual program.

Fox Networks Group ad sales guru Joe Marchese said during his company’s upfront that this new format will be used on a variety of Fox broadcast and cable channels, including FX’s new New York Times series “The Weekly” and certain Sunday nights on the broadcast network next season. He said this would be bring down the total of commercials by as much as 60 percent.

Reilly said he’s glad to see other networks follow their lead. “It has to happen, and we have to continue it,” he said of making the linear TV environment less commercial heavy. “TV has got to get to that place where there is less clutter, and that will be more effective for advertisers.”

The fact is, despite the confidence network executives shared on the upfront stage this week, nobody really knows where the media industry is headed. “We’re entering Mordor,” said Lowenthal. “What’s on the other side?”