1998
Lohan makes her big-screen debut in Disney’s “The Parent Trap,” winning rave reviews and a three-picture deal with the studio. She’s offered the female lead in “Inspector Gadget” but turns it down.

2000
She stars in made-for-Disney Channel movie “Life-Size” and lands the role of Bette Midler’s daughter in CBS sitcom “Bette.” However, when “Bette” moves to New York to shoot, Lohan drops out. 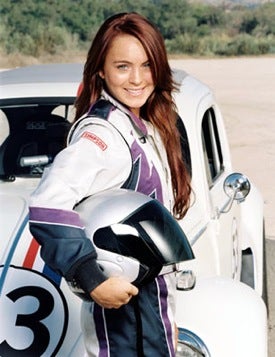 2002
An aspiring musician, she signs a five-album deal with Estefan Enterprises, run by Emilio Estefan.
In Disney Channel’s “Get a Clue,” she plays a rich student with plenty of fashion sense who must work with her rival from the school paper to solve the case when their teacher goes missing.

2003
The lead in another Disney remake, “Freaky Friday,” which is a hit with a $110 million domestic gross. Her debut single, “Ultimate,” helps propel the film’s soundtrack into the Billboard Top 20.
She moves to Los Angeles, sharing an apartment with former child star Raven-Symone and dating the likes of singer Aaron Carter, whose double-timing engenders a well-reported public feud with fellow teen queen Hilary Duff.

2004-05
Her father, Michael, is in and out of court on various charges, including hitting his brother-in-law at a party, not paying a hotel bill and crashing his car into a utility pole (he barely escaped with his life). With her father facing up to four years in prison, her mother Dina acts as her manager. Michael tries to claim a share of Lindsay’s earnings.

2004
She stars in “Confessions of a Teenage Drama Queen” for Disney, and provides vocals on four songs from the film’s soundtrack.
That’s followed by the hit “Mean Girls,” adapted from a bestseller by Tina Fey and produced by Lorne Michaels. 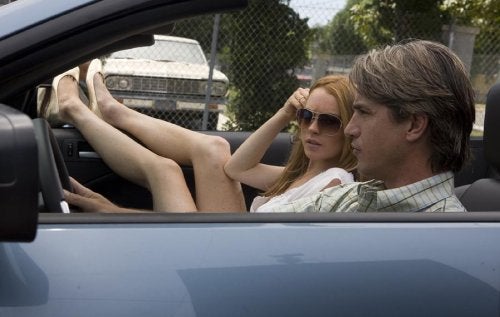 She dates Wilmer Valderrama and appears on his TV hit “That ’70s Show.”
Signing a record deal with Tommy Mottola’s Casablanca Records, she releases her debut album, “Speak,” which hits No. 4 on the Billboard charts in early 2005 and becomes a platinum seller.
She also ends up in the hospital, reportedly suffering from exhaustion and asthma, and a pursuit involving a paparazzi ends in a fender-bender.

2005
She stars in the Disney remake “Herbie: Fully Loaded,” featuring Herbie the Love Bug. Her increasingly voluptuous figure – which draws accusations of breast implants – leads Disney to digitally reduce her cleavage.
During filming, she’s hospitalized — again for exhaustion as well as chest pains.
Another paparazzi incident results in another car crash.
Dina Lohan files for divorce from Michael Lohan in a case that generates reams of tabloid ink detailing alleged abuse, drug use and alcoholism. Michael demands a share of Lindsay’s earnings but is turned down.
Lindsay admits she has been battling bulimia and experimenting with drugs.
Her second album, “A Little More Personal (Raw),” sells 82,000 copies in its first week, during the Christmas holidays, but then plummets out of the Top 40.

2006
She’s again hospitalized for an asthma attack after New Year’s Eve festivities in Miami.
She begins to take more adult roles, moving beyond Disney films to Emilio Estevez’s “Bobby” and Robert Altman’s “A Prairie Home Companion.” Her co-star in the latter, Meryl Streep, praises her talents, calling her “a fantastic actress.”
However, living at the Chateau Marmont and partying nonstop, Lindsay’s year becomes one long tabloid headline.
Dina tells Ryan Seacrest on his radio show that Lindsay has started attending Alcoholics Anonymous meetings.

2007
In January, she enters rehab.
Over Memorial Day weekend, an allegedly drunk Lohan loses control of her 2005 Mercedes SL-65 convertible and crashes into a curb and shrubs on Sunset Boulevard. Facing misdemeanor hit-and-run charges, she checks into Promises for a 45-day rehab program.
In July, while making “Georgia Rule” opposite Jane Fonda, she’s criticized by James G. Robinson, whose Morgan Creek is producing the film, for her bad behavior. In a July 28 letter to Lohan, the 70-year-old executive says she has "acted like a spoiled child and in doing so have alienated many of your co-workers and endangered the quality" of "Georgia Rule."
That same month, just days after turning 21, and less than two weeks out of rehab, she is arrested again for DUI, in Santa Monica.
She’s sentenced to serve at least 24 hours in jail in her drunk-driving cases under the terms of a plea deal.

2008
Suspects are arrested in the teen burglary ring that allegedly broke into the homes of celebrities including Lohan, Paris Hilton and Audrina Patridge.

2009
A Beverly Hills judge in October extends Lohan’s probation for a 2007 drunk driving conviction for a year to give her more time to complete a required alcohol counseling program.

A month later, her mother drops a bombshell: Lindsay was secretly dating Heath Ledger when he died in January 2008. She also implies she’s afraid her daughter will overdose on drugs and end up like Ledger.

March 9, 2010
Lohan files a $100 million lawsuit against eTrade, alleging its Super Bowl commercial featuring a “milkaholic,” boyfriend-stealing baby named Lindsay is modeled after her. She claims eTrade violated her rights by using her name and “characterization” without paying her or getting her approval. E*Trade says the claims are without merit.

April 7, 2010
Lindsay’s India documentary draws a mere 600,000 viewers when it airs on BBC3 and gets her into hot water with the country’s authorities.

April 22, 2010
The Lohan family drama is the talk of Twitter as Lindsay tweets that her estranged father has shown up at her apartment with law enforcement to check on sister Ali.

April 25-26, 2010
Lindsay is “dropped” from the cast of David Michaels’ feature “The Other Side.” (However, CAA, which reps the actress, says she was never signed to the project.)