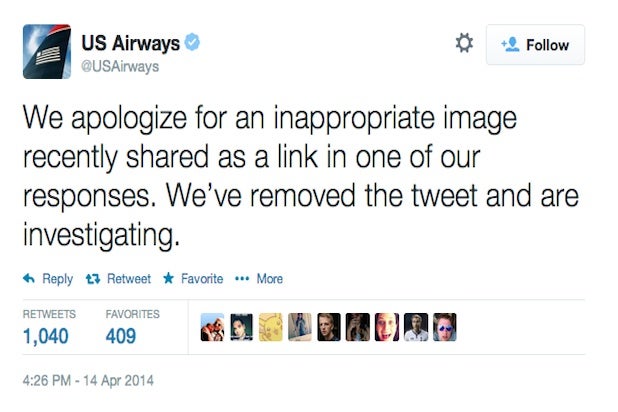 US Airways took a crash course in social media apology after it tweeted an extremely graphic picture of a naked woman on its Twitter stream as part of a response to a customer complaint about a recent flight.

“We apologize for an inappropriate image recently shared as a link in one of our responses,” the airline wrote. “We’ve removed the tweet and are investigating.”

The tweet was sent at 2:48 pm and was left up for an hour before it was pulled. The not safe for work photograph featured a naked woman finding an interesting place to land a model plane.

“We welcome feedback, Elle. If your travel is complete, you can detail it here for review and follow up,” the company tweeted, with the obscene photo accidentally attached.

US Airways explained that the graphic image (see the photo here – NSFW) was originally sent to the airline’s account and it had tried to flag it as inappropriate but tweeted it instead.

“Unfortunately the image was inadvertently included in a response to a customer,” the airline said in a statement. “We immediately realized the error and removed our tweet. We deeply regret the mistake and we are currently reviewing our processes to prevent such errors in the future.”

We apologize for an inappropriate image recently shared as a link in one of our responses. We’ve removed the tweet and are investigating.

Much fun was had at the airline’s expense.

Sorry @USAirways I thought that was a DM #mybad

Some people are saying @USAirways was hacked but it looks like an inside job.

Right now CNN is on the phone with @USAirways. “I heard you found a plane?”

.@USAirways, we take these tweets very seriously. Your IP address and details will be forwarded to security and the FBI.