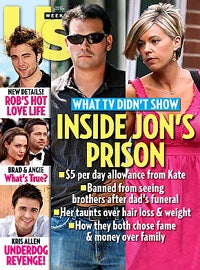 Wenner Media today announced its permanent successor for Janice Min, the high-profile editor of Us Weekly who exited the company in July. And it is Michael Steele, the magazine’s executive editor who served as acting editor-in-chief since Min’s departure.

According to the New York Post, Steele’s annual salary will not touch what Min’s reportedly was – roughly $2 million per year.

The circumstances surrounding Min’s departure are still a bit hazy – rumors circulated last summer that Jann Wenner was ready to negotiate a smaller salary, and Min opted not to renegotiate her contract.

At the time, Min told her staffers this: “I decided it was time to try something else in my life, do a little Gosselin detox and occasionally go out on Monday nights. There are no immediate plans, except to enjoy the month of August, take some tennis lessons, and maybe finally edit my wedding album.”

Like most magazines, Us Weekly has had a tough year at the newsstand. Through June, single copy sales were down 3 percent, although its total paid and verified circulation per issue, at over 1.9 million copies, was actually up.

Through September, Us Weekly’s ad pages have slipped 9 percent – though that’s far better than the industry’s 27.3 percent average.

Steele has already been praised by critics for handling the transition. (An August headline on Mediaite read: “Was Janice Min Overrated?”)
http://www.mediaite.com/online/was-janice-min-overrated-us-weekly-doing-great-under-acting-successor/

The New York Times notes that Steele, “a married father of two, is not in the same life stage as his average reader, who is 32 and female.”

That doesn’t necessarily matter. I guess just keep an eye on the Gosselin coverage – if the tide suddenly turns toward Jon, then you’re onto something.