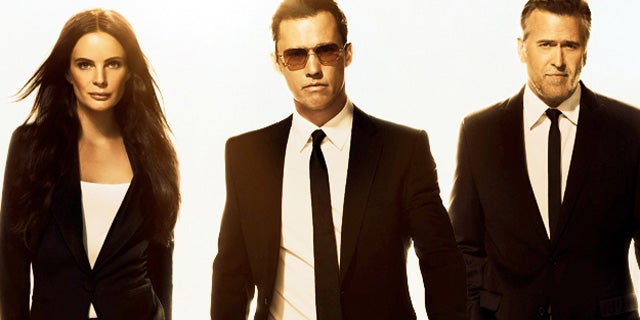 “Summer Camp” places 16 adults in a beautiful secluded landscape to relive the experience of attending summer camp, with some camp-inspired competitions thrown in. It comes from “Big Brother” producers Allison Grodner and Rich Meehan and Fly on the Wall Entertainment in association with Sony Pictures Television. It debuts in July.

In addition, USA announced that “White Collar” will return in the fall along with much-buzzed about unscripted series, “The Choir,” an adaptation of the award-winning UK hit.

See the full series descriptions and premiere dates below.

"Graceland": Inspired by true events, USA’s new original series focuses on the lives of undercover agents from the FBI, DEA and US Customs who reside and operate under one roof. When forced to give up any shred of normalcy and the question of trust is a matter of life or death, the house becomes a sanctuary, their “Graceland.” Stars Daniel Sunjata, Aaron Tveit, Vanessa Ferlito, Brandon Jay McLaren, Manny Montana and Serinda Swan. From creator Jeff Eastin, this was a story too good to not be told. Premieres June 6, airs Thursdays at 10/9c.

"Royal Pains": After spending the winter recuperating from brain surgery, Hank (Mark Feuerstein) is ready to return to work on the first weekend of summer — or so he thinks. With their Hamptons medical concierge service, HankMed, busier than ever and Boris' (recurring guest star Campbell Scott) death still a mystery, Hank finds himself relying on Jeremiah (new series regular Ben Shenkman) in a very surprising way. Evan’s (Paulo Costanzo) rescue of an influential neighbor (recurring guest star Frances Conroy) has unexpected consequences for his future. Paige’s (Brooke D’Orsay) work at an auction house gives her an eye-opening look into Boris' estate. A newly single Divya (Reshma Shetty) finds her plan to focus solely on work hitting an unexpected snag after the return of an ex. And a change in ownership at the local hospital brings new complications for HankMed. Callum Blue will recur this season as Milos, Boris’ cousin. Premieres June 12, airs Wednesdays at 9/8c.

"Necessary Roughness": Season three picks up six months after the New York Hawks playoff run at the end of season two. Big changes at the team force Dani (Golden Globe®-nominee Callie Thorne), TK (Mehcad Brooks) and Matt (Marc Blucas) to reconsider their futures with the franchise. After Dani’s success with TK and the New York Hawks, a powerful sports and entertainment management agency run by the seductive Connor McClane (John Stamos) makes her a promising offer to join his firm. The new job could launch Dani to the next professional level — but at what cost? TK struggles under the reign of a new coach. After a long absence, Nico (Scott Cohen) resurfaces in a surprising place, complicating life for Dani. This season will also welcome John Stamos, David Anders and Karissa Lee Staples to the cast. Premieres June 12, airs Wednesdays at 10/9c.

"Covert Affairs": The hit international spy drama returns this summer for its highly anticipated fourth season with Golden Globe®-nominee Piper Perabo as Annie Walker. This season kicks off after Annie and her longtime best friend and blind CIA tech-op, Auggie (Christopher Gorham) finally acknowledging their romantic feelings for one another. Things get complicated at the agency, as Annie aligns with Henry Wilcox (guest star Gregory Itzin) in a dangerous, undercover mission that has potentially scandalous consequences for the CIA. Joining the cast this season is Hill Harper (“CSI: NY”) who will play Calder Michaels, an ambitious CIA station chief based in Latin America. Premieres July 16, airs Tuesdays at 9/8c.

"Suits": The critically-acclaimed, award-nominated and top-rated legal drama returns for its third season with a shift in the dynamics at the firm. After merging with a top British firm, Harvey Specter (Gabriel Macht) is at odds with his boss and mentor, Jessica Pearson (Gina Torres), and forces Mike (SAG Award nominee Patrick J. Adams) to do something he never thought possible — betray Harvey. Meanwhile, things with Mike and Rachel (Meghan Markle) get more complicated after Mike finally reveals his secret that he never actually went to Harvard — and they cross a line that can never be uncrossed. Premieres July 16, airs Tuesdays at 10/9c.

"Summer Camp": From Emmy®-Award winning producer Allison Grodner and Rich Meehan (“Big Brother”) and Fly on the Wall Entertainment in association with Sony Pictures Television, this fun-filled and escapist series sends die-hard campers back to the most cherished place of their youth for the thrill of a lifetime. In "Summer Camp," viewers will meet an eclectic group of 16 adults from all walks of life — from the fanatic hunter to the former nerd-turned-supermodel to the vegan yoga instructor. Campers will pack their bags and head to an idyllic lakeside retreat, where they will indulge in over-to-top competitions inspired by classic camp games. At the end of the summer, the remaining competitors face off in the “Campathalon,” an ultimate Olympic style event. Premieres in July.