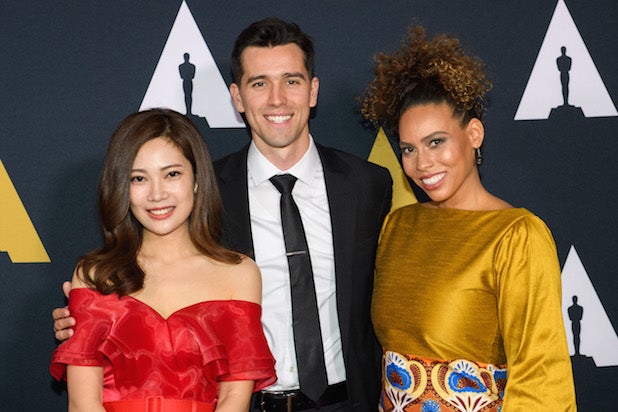 Students from California Institute of the Arts, Florida State University, New York University and the University of Southern California won the gold medals on Thursday night at the 2018 Student Academy Awards, which were handed out at the Samuel Goldwyn Theater in Beverly Hills.

FSU student Shae Demandt won gold in the alternative category for “Reanimated,” CalArts’ Hanna Kim won in the animation category for “Raccoon and the Light,” NYU’s Mathieu Faure won in documentary for “An Edited Life” and USC’s Hua Tong won in narrative for “Spring Flower.”

Other awards in animation went to USC and Ringling College of Art and Design; in documentary to USC and the University of California, Berkeley; and in narrative to USC and Chapman University.

In the international categories, the gold medals went to Pierre Perveyrie, Maximilien Bougeois, Marine Goalard, Irina Nguyen-Duc and Quentin Dubois from MOPA for “The Green Bird,” Mart Bira from the University of Hertfordshire for “Nomadic Doctor” and Jonatan Etzler from the Stockholm Academy of the Arts for “Get Ready With Me.”

The winning students and films had already been announced, but the medal placements – gold, silver and bronze – were announced at the Student Oscars ceremony by presenters Kumail Nanjiani, Catherine Hardwicke, Arthur Dong and Patricia Riggen.

All winners, regardless of medal placement, are now eligible for this year’s Academy Awards. In the last 10 years, 11 Student Academy Awards winners have gone on to receive Oscar nominations, and one, 2010’s “God of Love,” has won.