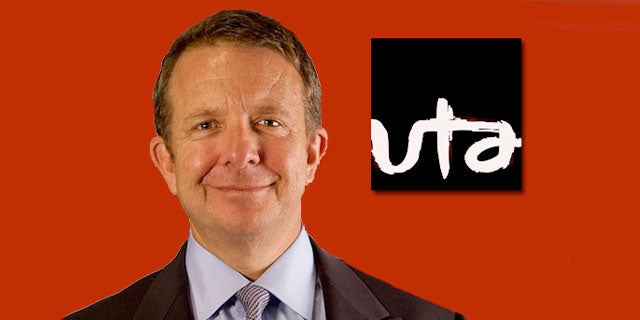 Hollywood talent agency UTA has been talking with several private-equity firms about selling a stake in the company to a strategic investor, several individuals with knowledge of the agency’s plans have told TheWrap.

The individuals said that agency CEO Jeremy Zimmer and David Spingarn, head of in-house strategy and business development, were spearheading the search in consultation with the agency's board of directors. UTA has hired Moelis & Company, founded by investment banker Ken Moelis, to advise the agency, according to one of the individuals.

None of the individuals would go on the record because of the sensitivity of the subject.

“They’re ambitious,” one individual told TheWrap, noting that the agency wants to add high-profile new agents and talent. It boasts a client list of top-tier stars like Johnny Depp and Angelina Jolie but has seen the rising stars Rachel McAdams and Noomi Rapace leave in the last month.

The extra capital would enable UTA to fortify its finances, add agents, retain existing talent and expand its businesses. It also would make UTA the third major agency to sell significant equity to outside investors in the past few years, following WME and CAA.

Two individuals with knowledge of the agency's plans said that the agency was seeking the investment, while another knowledgeable executive said it was the other way around, that had been approached by several potential investors. UTA declined to comment.

This is not the first time UTA has talked with an outside group about stepping into the Hollywood talent arena.

“They’ve been trying to sell for quite some time,” another individual told TheWrap. “They’ve been looking not for an exit but for a strategic investment.”

Founded in 1991 by the merger of two smaller firms — Bauer-Benedek and Leading Artists Agency — UTA has grown steadily over the past two decades and continues to expand, as evidenced by its recent move into splashy new Beverly Hills offices and the 2011 opening of a New York office. It now employs more than 100 agents.

At the same time, the agency has several partners who would like to net some money by selling part of their stake in the company.

“It’s important to retain talent inside and outside the agency,” one individual said. “Executive talent is just as important.”

That doesn’t mean those partners are looking to cash out and leave, as has been speculated. “I don’t see a world where [chairman] Jim Berkus or [co-founder] Peter Benedek wants to hang it up so quickly,” another individual said. “Those guys are having a good time.”

UTA has long branded itself as the “alternative agency,” one that has been very active in the digital space and presents a smaller, more personal face than the much larger CAA and WME.

“They are smaller but not that small,” the individual told TheWrap. “If you understand the value of a TV package, they are doing really well.”

With clients like "Modern Family" creator Steve Levitan, "The Sopranos" creator David Chase and the recent addition of Peter Chernin's TV division, UTA does boast several robust TV packages, a primary source of income for most agencies. It does not have a substantial music touring business like CAA and WME.

Both of those agencies took strategic investments in the past few years, CAA from TPG Capital and WME from Silver Lake Partners. Those deals gave the agencies more cash on hand, ameliorating cash flow problems resulting from the recession, the stagnating film industry and lush new offices. It also enabled principals to add agents, invest in new ventures and monetize their own stakes.

Yet private equity also has come with pitfalls, as evidenced at both of those agencies and at ICM Partners. Taking outside money made the firms even more focused on the bottom line, driving some agents to leave, as TheWrap has reported.

At ICM, many top agents were so unhappy with an outside owner that they bought the sakes of Rizvi Traverse and Chairman Jeff Berg and transformed the place into a partnership. Several senior agents have left the agency in the aftermath, some exiting graciously, like Bob Broder, and some with great acrimony, like Berg.

For the record: An earlier version of this article incorrectly stated that UTA represented Larry David.