Lovato has seven seven studio albums to date. Lovato’s most recent album, “Dancing with the Devil… The Art of Starting Over,” was released in April where it landed at No. 1 on the Billboard Album Sales Chart and No. 2 on the Billboard Top 200 Chart.

The album coincided with the launch of Lovato’s four-part documentary series from YouTube Originals and director Michael D. Ratner entitled “Demi Lovato: Dancing with the Devil” at SxSW, where it opened the 2021 festival. The docuseries is an honest look back at some of the most trying times in Lovato’s life as they unearth their prior traumas and discover the importance of their physical, emotional, and mental health. The docuseries is a follow up to their 2017 YouTube Originals documentary, “Simply Complicated,” which now has more than 35 million views on YouTube. 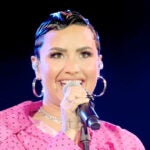 Outside of music, Lovato’s film and television credits include “Smurfs: The Lost Village,” “Sonny with a Chance,” “Glee,” “Barney & Friends,” serving as a mentor on the U.S. version of “The X Factor,” and co-starring in the final season of NBC’s “Will & Grace.” They were also featured alongside Will Ferrell, Rachel McAdams and Pierce Brosnan in Netflix’s hit feature film “Eurovision.” Up next on the screen, Lovato can be seen executive producing and starring in NBC single-camera comedy pilot “Hungry.” Additionally, Peacock has ordered four-part series “Unidentified with Demi Lovato,” which will see the singer, her skeptical best friend Matthew and her sister Dallas attempt to help uncover the truth about the UFO phenomena.

They also continue to be a global advocate for mental health. In 2017, Lovato was named by Global Citizen as the organization’s official ambassador for mental health, with a special focus on vulnerable communities around the world. 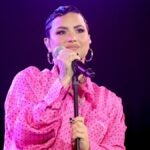 Lovato is also a New York Times best-selling author with their book “Staying Strong: 365 Days a Year,” which was released in 2013. Additionally, on May 19, 2021, Lovato premiered their new podcast, “4D With Demi Lovato,” where they announced that they identify as non-binary and have officially changed their pronouns to they/them.