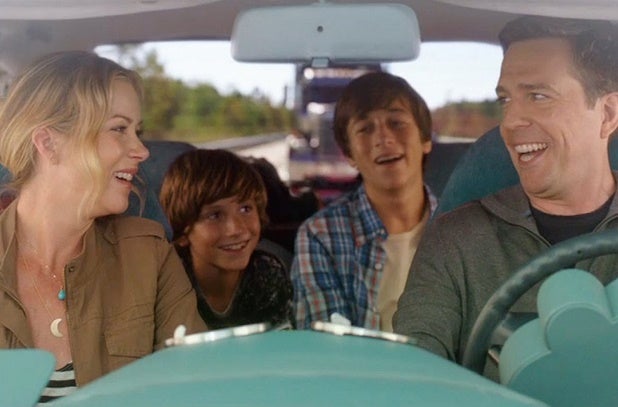 “Vacation,” the raunchy sequel to the 1983 comedy road trip classic, took in $3.8 million in its first day at the box office, Warner Bros. said Thursday.

There’s still a long trip ahead, but with Ed Helms and Christina Applegate in the front seat of the station wagon, the New Line update took off Wednesday in a style befitting the Griswolds. They may eventually get to the box-office Wally World this weekend — in this case the $35 million or so analysts are projection over the five days — but could lose a hubcap or two along the way.

The first-day haul was a little more than half of the $6.7 million that “We’re the Millers,” another R-rated New Line comedy, did on its opening Wednesday. The Jennifer Aniston-Jason Sudeikis pot comedy wound up with around $38 million in its first five days and went on to more than $150 million at the domestic box office and $270 million globally in 2013.

In a more positive light, it was just under half of the $8.3 million that the first “National Lampoon’s Vacation,” starring Chevy Chase and Beverly D’Angelo who have cameo roles in the new film, took in over its entire first weekend.

Written by John Hughes, directed by Harold Ramis and co-starring Randy Quaid, that one ultimately took in $61 million domestically. That would be about $150 million today if adjusted for inflation. It won that first weekend by the way, topping Universal’s “Jaws 3D” and Fox’s “Return of the Jedi.”

The production budget for the “Vacation” sequel directed by John Francis Daley and Jonathan M. Goldstein and co-starring Leslie Mann and Chris Hemsworth is roughly $30 million, so this one has profitability in its headlights.