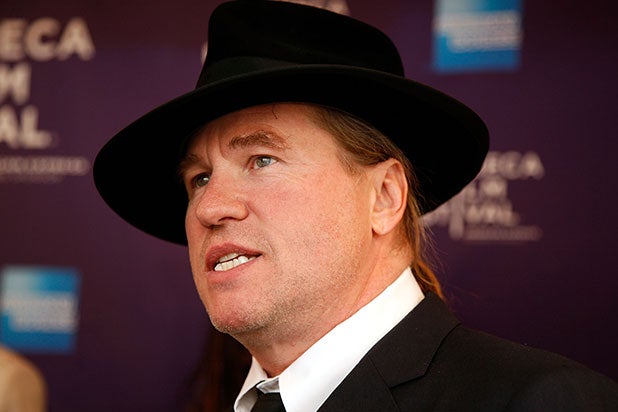 Val Kilmer has called Anthony Bourdain’s suicide “selfish” in a lengthy Facebook post in which the actor tells his late friend, “You’ve given us cause to be so angry.”

“From every corner of the world you were loved. So selfish,” Kilmer wrote on Facebook on Friday. “You’ve given us cause to be so angry. A spiritual guide once told me suicide is the most selfish act a human can execute and I was confused but she explained there’s just no mental place further away from humanity and purpose than the hypnotized numbness that creates the false picture of despair, that forces the victim, unaware, to believe, life’s legacy is over.”

He added, “Those of us that knew you are shocked and angry and angry and angry selfishly angry, for what you just did to us… Oh Darkness. My prayer before the light breaks this morning of June 8th, is that it doesn’t ever again fool another warrior like you, who chased the hot slice of momentary satisfaction around the world 15 times, but found no reason for 16.”

Kilmer also alludes to his own battle with throat cancer in his post.

“Would you have taken your life two years ago when like me you were unable to take in food and move it with your tongue over your taste buds because your tongue was too swollen?” he asked. “Is too swollen. I think and dream and plan on eating and tasting and enjoying every meal I’ve ever enjoyed and every meal I’ve learned to enjoy in my imagination, Altho I’ve never met a meal I didn’t like in the last 40 years except anything with too much cilantro. Was that it? You woke up and realized you were no longer hungry.”

It tells me so much about you that in this moment you shame him. The only appropriate response is love. Unfollowing…

Suicide is not selfish. The only reason people suicide is to escape the pain.
This tweet is just awful.

Suicide is not selfish. It’s a very personal battle within. Unfortunately, mental illness does not allow you to look past your sorrow and pain. It’s not done out of malice.

@valkilmer when I tried to take my own life, I truly felt what I was planning was the most unselfish thing. Everyone would be much happier when I was gone. The veil of delusion is at bottom & only if you make it back to the surface do you realize how selfish it is. ❤️2U

How can you be mad at someone who killed themselves? Because they were selfish for ending their life? Is it not selfish that you would rather they live in pain than decide to end that pain? Who do you think suffered more? The guy who ended his life or the people who had to mourn?

Lena Dunham weighed in on the matter of blaming those who commit suicide, though did not mention Kilmer.

People don’t commit suicide because of an event, a person or a thing. You wouldn’t blame a person for someone else’s cancer, nor call someone weak for developing it. Only when we start talking about depression as a disease will stigma be erased.

Bourdain died on Friday at age 61 of suicide. According to the BBC, Bourdain’s body was found in a hotel room in a Strasbourg, France, where he was shooting an episode for CNN’s “Parts Unknown,” now in its 11th season. Many stars took the opportunity to note that Bourdain’s death came just days after that of fashion designer Kate Spade, also by suicide, and underscored the crippling effects of depression.

“You found and showed us pockets of freedom from individuals around the world, from your pirate ship of tv and with a crew of brilliant writers producers camera and sound people, assistants, executives and lawyers who saw you clearly and loved you dearly, and went the extra mile on paper, to enable you to walk there, in the rain, before daylight, and waiting for the sun, reflect quietly on the pageantry, about to unfold,” concluded Kilmer. “You could have and should have given it one more shot. Sometimes we must live in service to another’s life and live with no hope of equality. Life isn’t fair that way. Who says you had a right to take away all this love from us so soon? Oh the darkness. The darkness on the edge of town. ‘There’s a darkness in the edge of town…’ you left too soon my friend. I fell asleep to watching you enjoy Uruguay last night. It was a rerun but I always find something I didn’t see before… you left too soon. And I’m going to prove it…”

Anthony Bourdain's Best TV Moments, From a Meal With Obama to a Trip to Waffle House (Videos)
"Low plastic stool, cheap but delicious noodles, cold Hanoi beer." Bourdain famously tweeted this line along with a photo of himself and President Obama hunching over a small table in Vietnam as he demonstrated the best way to slurp noodles. It's an incredible sight to see both Obama and Bourdain so at home with their worldly curiosity and feels like an image of Americans at their best.
You may know it from the documentary "Jiro Dreams Of Sushi," but Bourdain got to the best sushi in the world first. In this clip he makes a great case for what it is to be a master of something and the importance of respecting someone else's values by eating something the way it was served. That means no soy sauce and no wasabi, just total faith that what you're about to eat will already taste like perfection.
Bourdain was known as a "rock star" chef for how he approached life with reckless abandon. So it makes sense that he'd be close with a bona fide rock star in Iggy Pop. While he had a lot of great musical moments lunching with musicians such as Serj Tankian in Armenia or The Black Keys in Kansas City, his finest moment came in Miami, where he sat down for a hilariously healthy and refined meal with one of punk's legends. "What does it say about us that we're now sitting in a healthy restaurant, I just came from the gym, and we're sitting in Florida?"
Bourdain's brash personality shines through in this brief clip in which he shows a little disdain at being so well known for making a relatively simple dish like scrambled eggs. But they might be the best scrambled eggs you'll make, and it's a must try. "Isn't it nice to do something vaguely normal like cooking for yourself," he says in the video. "I feel like a human being again."
Part of Bourdain's charm was that he was unapologetic about things he didn't like and had a way with words to embody his disgust. In this amusing clip of him talking with Conan O'Brien, he recalls a depressing meal he had at an airport Johnny Rocket's that he called temporarily "soul-destroying." "We all sort of stood there silently for a second, kind of sharing this moment of perfect misery. None of us were where we wanted to be."
One of Bourdain's more amusing discoveries in plain sight was him finally venturing to a Waffle House, this one in Charleston, South Carolina. The way he describes Waffle House as an inclusive, welcoming place with a warming, inviting yellow glow feels like a beautiful, microcosm of America.
"Neither East nor West but always somewhere in the middle," Bourdain says in this 2014 episode of "Parts Unknown" where he found some unexpected bonds with an Iranian family, sitting down to a glorious Persian, home cooked meal. He went in fully knowing that American audiences might react negatively to it and hoped to break down barriers.