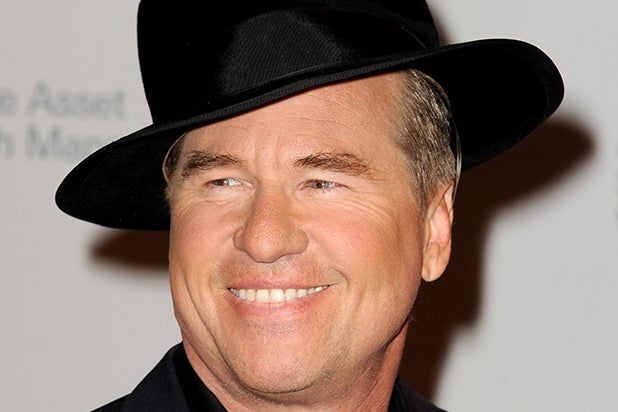 We all have celebrity crushes, but only a choice few who do are celebrities… with hundreds of thousands of Twitter followers.

The actor spent a good chunk of his weekend tweeting about his celebrity crush — Cate Blanchett — and some felt it crossed a line. Did Kilmer’s tweetstorm go over the edge? Let’s break it down.

Kilmer started off by telling a story of how he apparently flew to Australia just to meet Blanchett, but met her husband instead.

Once I flew all the way to Australia just to talk to Cate Blanchett. Her husband met me first. Or, instead, I guess, to be accurate. pic.twitter.com/xSoYxRi0jh

Granted, there is probably more to this story than Kilmer can fit into Twitter’s character limit. But at the point of his initial Blanchett tweet, he still gets the benefit of the doubt. Also, “The Doors” actor respects her as an actress and as a person, as he describes in tweets that followed:

She's just as amazing in person. Some super stars aren't-Some superstars don't do a thing to ya in person-Cate is so real it's almost unreal

You see, the star of 1995’s “Heat” has firsthand experience of the actress. He worked with her on 2003’s “The Missing” and on Terrence Malik’s latest, “Song to Song.” He described working with her in a scene and how he was in awe by the way she picked up a shovel. “I was so dazzled by HOW she picked it up I forgot my line,” he wrote:

Once I did a cameo just to hang w/ #cateblanchett who pickd up a shovel in our sc. I was so dazzled by HOW she picked it up I forgot my line

Actors choosing projects based on writers, directors or other actors is common in Hollywood, especially if you have the privilege to choose your roles. We like Blanchett, too. She’s a chameleon on the screen and always holds herself with dignity. We get it, Val.

However, things got weird when Kilmer described dreams he had that starred the actress:

And recently I've had 2 dreams with #CateBlanchett in them. Her husband wasn't in either of them.

… and then he decided to highlight her looks instead of talking about her award-winning performances or the sheer talent of the Oscar-winning actress:

I mean even if she couldnt act you know what I mean? pic.twitter.com/xlcaCTT1QI

Many called out Kilmer on Twitter and in the media, saying his tweets were “creepy”:

In response, Kilmer went on another Twitter rant, defending his love of Blanchett.

“I’ve never done said or written a single idea that wasn’t of the highest respect and admiration for #cateblanchett or any other great talent,” he tweeted. He continued:

She's a friend of mine and I've met her husband thru the years and we've all gotten along just fine. Anyone who thinks I need to curb my

Enthusiasm for a great rare artist doesn't understand how difficult the job is and how we artist count on the respect of our peers. She will

Back up every word I say n love that I say I love her. I would love an actor I didn't even enjoy if he flew the world to talk about a role.

Is it wrong to express respect for a fellow actor? Probably not. Is it wrong to publicly talk about how she’s in your dreams and imply that her husband is probably in the way? Yeah, probably.

How about when you claim somebody’s your friend and then objectify their looks instead of their talent? Definitely teeters on inappropriate — though, in his defense, Kilmer led his Blanchett-focused Twitter storm with her talent.

In case you want to further demonize him, Kilmer also has a fixation on Jessica Chastain, too… sort of: