On a few occasions reviewers of "Valentino: The Last Emperor" have identified me as a “dedicated follower of fashion.” I never thought I would have that epithet linked to my name. Before I started this project, I didn’t know the first thing about the subject, or really care about it all that much.

What attracted me to Valentino as documentary subject was, in fact, something altogether different.

In 2004 I was dispatched to Rome to write a magazine story about the greatest of the Italian artist-designers. I 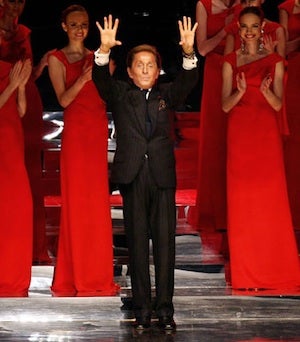 have to admit that the piece was not one I was particularly excited about: All of the press I had read about Valentino pointed to a routine assignment about a very talented and successful gentleman, but not much new appeared to be on the radar.

When I got to Italy, my opinion changed very quickly.

My first day of reporting, I met not only Valentino, but also Giancarlo Giammetti, Valentino’s partner of 50 years, and the man who has long labored in the shadows of the man the Italians call maestro. Giammetti, it became clear, was the endlessly devoted master planner behind Valentino’s storied career. He is not only the accomplished businessman, but the fierce protector of his lifelong partner’s talent.

My first day observing the action at the Valentino headquarters, a Renaissance palazzo near Rome’s Spanish Steps, I knew that I had found a great untold story. As famous as Valentino has been for 50 years, the real and very remarkable tale of his personal and professional partnership with Giammetti had never been explored. The whole time I was reporting the magazine story, I was, in effect, seeing a movie in my head.

As soon as the article was put to bed, I asked Valentino and Giammetti if they would be willing to participate as the subjects of a documentary. After some deliberation, they agreed, and we began preparing for production in the summer of 2005, with the seed money coming from my own bank account.

I very much knew what story I wanted to tell. "Valentino," the doc, as I envisioned it — even at that early date — was a movie about a partnership, the end of an era and, ultimately, a love story.

Matt Tyrnauer was born in Los Angeles and studied film at Wesleyan University in Middletown, Connecticut. For 16 years he has been an editor and writer for Vanity Fair magazine, writing features including profiles of Martha Stewart, Valentino Garavani, Philippe Starck and Frank Gehry, among many others. "Valentino: The Last Emperor" is Tyrnauer’s first film, yet filmmaking has long been part of his life. His father was a successful TV writer and producer, responsible for scripting some of the best-known programs on TV, such as “Colombo,” “The Virginian” and “Murder, She Wrote”, which his father produced. Tyrnauer’s journalism career began at Spy magazine. Graydon Carter, the co-founder of Spy, then hired Tyrnauer to write for him when Carter was editor of the New York Observer. In 1992, Tyrnauer followed Graydon to Vanity Fair, where he has worked ever since. He lives in New York City.
x
Looks like you're enjoying reading