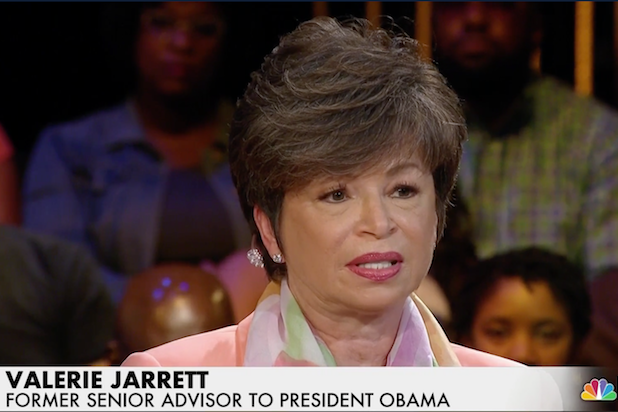 After Roseanne Barr insulted Valerie Jarret and George Soros in language condemned as racist, prompting ABC to cancel Barr’s hit sitcom, Jarrett said the matter should be a “teachable moment.”

“First of all, I think we have to turn it into a teaching moment. I’m fine. I’m worried about all the people out there who don’t have a circle of friends and followers coming to their defense,” the former Obama adviser said during an MSNBC town hall on racism.

Asked whether she agreed with ABC’s decision to cancel the show, Jarett said yes, adding that Disney CEO Bog Iger called her to inform her about the network’s decision before making the announcement.

Also Read: Roseanne Barr Apologizes for 'Planet of the Apes' Valerie Jarrett Tweet: 'My Joke Was in Bad Taste'

“He wanted me to know before he made it public that he was canceling the show,” she said. Watch her appearance below.

Just In: @ValerieJarrett reacts to Roseanne's racist tweet about her. pic.twitter.com/6y6Vornhmx

On Tuesday morning, Barr tweeted “Muslim Brotherhood & Planet of the Apes had a baby=vj,” referring to Jarrett. She later apologized for her remarks, calling them a “bad joke,” and vowed to leave the platform. Around the same time, Barr started an argument with Chelsea Clinton in which the actress repeated a racist and antisemitic conspiracy theory about George Soros.

Soon after, ABC canceled “Roseanne,” with Disney CEO Robert Iger tweeting that the decision was “the only thing to do here,” and “the right thing.”