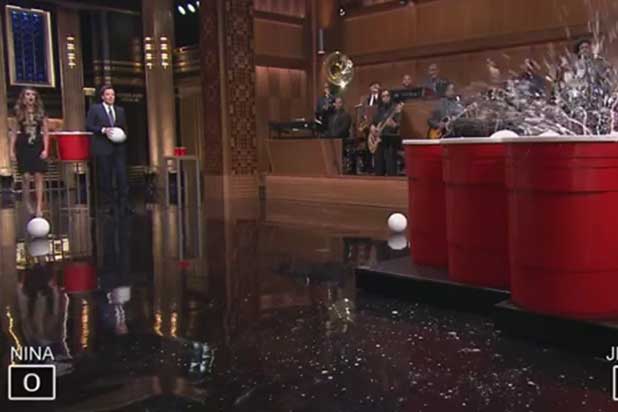 Nina Dobrev plays a vampire on The CW, but when it comes to beer pong on “The Tonight Show” she neither bites nor sucks.

(Cue one of Questlove’s rim-shots.)

“The Vampire Diaries” starlet went toe-to-toe with NBC’s Jimmy Fallon in giant beer pong Tuesday night and it was a match for the ages.

The self-assured host took an early lead and even mocked Dobrev as she struggled with chugging her beers.

“Ohhh, I hate beer,” she said, after swallowing the first cup with a grimace. “I’m a little drunk now.”

The alcohol must’ve loosened her up, though. After falling behind two cups to zero, Dobrev started sinking her volleyball-sized ping pong balls in the five-foot cups and — to Fallon’s dismay — actually emerged victorious.

See the intoxicating clip above.