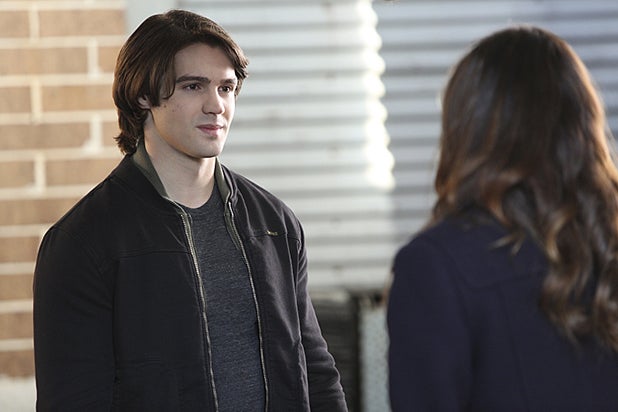 AJeremy Gilbert is leaving Mystic Falls for art school, but will he be back?

After six seasons and 125 episodes on The CW’s “The Vampire Diaries,” Steven R. McQueen will appear for the last time on Thursday as a series regular. His character is leaving town indefinitely to pursue a higher education, but the actor revealed Jeremy could easily return some day, if even just for a cameo.

“Jeremy leaving was set into motion on the last episode, and this week he gets to say his goodbyes,” McQueen told TheWrap. “But they left the door open for him to come back in the future, which I would love to see happen … maybe for a wedding or something.”

His character was once just Elena’s (Nina Dobrev) little brother, but Jeremy has evolved noticeably over the course of the series, first into a muscular vampire hunter and later into Bonnie’s (Kat Graham) lover. McQueen opened up about his favorite memories on six seasons of “Vampire Diaries,” revealed what he might miss most when it’s all said and done and revealed what he plans to do next with his career.

TheWrap: Can you sum up your “Vampire Diaries” experience in one word?
Steven R. McQueen: “Life.” I shot the pilot for “The Vampire Diaries” when I was 19. I’m 26 now. I’ve grown up and lived a lot on this show. So, yeah, I’d say life.

What was your favorite arc for Jeremy?
The vampire hunting … It was a lot of fun, I would’ve liked to do even more action and stunts on the show … And also all of the great relationship moments with Bonnie. There were some great scenes between the two characters.

Least favorite arc? Or maybe a decision you wish Jeremy wouldn’t have made?
I think Jeremy’s story went exactly where it needed to go.

What will you miss the most about working on the show?
Living in Atlanta [where the series shoots], which was amazing … are amazing, too, and the cast is like family … And the fans, who are so passionate and send me so many tweets.

What was shooting your last episode “Stay” like?
My final scene required someone literally putting their foot on my face, and we shot it 10 times. We kept doing more and more takes. Finally, I looked up and the entire cast and crew was there dressed up like superheroes. Then we had cake.

Superheroes? You’re a big comic fan, right?
I’ve been into superheroes and comics since I was a kid.

On Monday TheWrap reported Andrew Garfield had left the Spider-Man franchise. Is that a role you’d be interested in?
I just saw that … that would be amazing.

You’ve also fueled rumors about playing the DC Comics hero Nightwing, perhaps on the new “Teen Titans” series. Is that more appealing than Spider-Man?
If they offered me either Spider-Man or Nightwing, I would crap my pants.

What’s next? Film, TV, something else?
I don’t know, I just put my head shot up on a Craigslist ad (laughs) … Being an actor is a funny job. I’m just happy to work.

See an inside look from his final episode below:

The CW Diversity Scorecard: From 'Arrow' to 'Vampire Diaries' (Photos)

The youth-driven broadcast network is improving year to year, but still doesn’t quite reflect the diverse world of its target audience

Its cast is large, but "The 100" features only 3 non-white characters out of 11.
View In Gallery