If the makers of “Dr. Horrible’s Sing-Along Blog” got together with the “Twilight” team, their creative output might resemble “I Kissed a Vampire,” an original web series debuting Oct. 13 on iTunes.

But Chris and Laurie Nolan don’t have the budget or the staff of those productions, and they pretty much created “Vampire” in their home office/edit suite in Santa Monica for about the cost of a day’s catering on “Twilight.”

They do have the marketing muscle of iTunes, not to mention the stars of “High School Musical,” Lucas Grabeel (who played Ryan Evans) and Drew Seeley (whose voice emanates from Zac Efron’s mouth), plus a slew of original songs by Emmy nominee Frankie Blue (“V.I.P.”).

“Vampire” is about a teen romantic triangle that’s complicated by the fact that both of the boys in love with Sara (newcomer Adrian Slade) are vampires: Drew (Grabeel) has just become one, after a suspicious bat bite during a camping trip, while Trey (Seeley) revels in the life of the undead.

The Nolans had been working on another project entirely, a Jimi Hendrix biopic, with executive producer Mike Slade, a Microsoft veteran with a strong interest in music and musical theater.

They were ready to roll with German financing in September 2008, until the worldwide financial meltdown put that film on hold.

Instead, Chris Nolan said, he and his wife, who are “big music fans,” decided to “go make something fun that doesn’t cost $3 million” and still featured music. They had a horror series in development and thought it would be a good idea to turn that into a musical. They took that idea to Slade, and he backed them up.

As Laurie Nolan put it, “We didn’t have this preconceived notion that vampires are hot! ‘Twilight’ was “in the ether, and we were probably aware of it. But doing a musical was what was most important to us.” 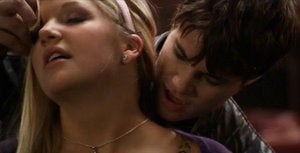 Also, she said, “No question, we were aware of ‘Dr. Horrible,’” and they were influenced by Joss Whedon’s Internet hit, especially in the way its fame spread virally via social networking outlets.

In fact, like Whedon, the Nolans had made their own web series during the writers’ strike, “Strike Life,” and enjoyed the creative freedom it offered. They used performers from Second City and “Mad TV” to put together web shorts supporting the writers.

It was during that production period that they met songwriter Blue, who set the Nolans’ “Vampire” lyrics to music.

Using crew and creative contributors they knew from Chris Nolan’s career as a commercials director, including d.p. Christopher Gosch, they shot the first episode in four days.

And that wasn’t the only previous connection leveraged for the web series. Seeley had auditioned for the lead in the Nolans’ movie “Floating Bridge,” so he was willing to audition for “Vampire.” Once the young actor heard five of the songs in demos, Laurie Nolan said, he suggested his friend Grabeel — exactly the actor the Nolans had in mind.

However, they also found creatives in more unusual ways. For instance, costumer Shannin Carr answered an ad that Laurie Nolan posted at Craigslist. Out of “20 billion responses,” Laurie says, Carr stood out because her response was essentially, “This is what I’ve lived for, to do a vampire movie!” 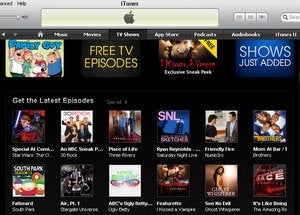 Carr had been collecting Goth wardrobe items for a decade, and finally got the chance to use them.

Even though it was a small budget, Chris Nolan said, “People came at this with a ‘Sweeney Todd’ passion!”

iTunes will roll out the three completed episodes of “Vampire” on Oct. 13, 20 and 27 — just in time for Halloween.

Another six episodes, with 12 more original songs, are in the works, with plans to shoot in December.

Chris Nolan is excited about working with iTunes. “They are passionate about getting behind filmmakers doing this kind of stuff outside the system,” he said.

The Nolans, who cut their own trailer and featurette and even designed much of the marketing and merchandising for “Vampire,” delivered their final cuts to iTunes in late September, indicative of the quicker turnaround time for the Web.

The iTunes store’s TV page features the “I Kissed a Vampire” teaser featurette alongside such established titles as “Desperate Housewives” and, conveniently, “Twilight.”

Also on the case is American Pop, a social media marketing firm. And, of course, Seeley and Grabeel are promoting the film via Twitter, and it has its Facebook fan page as well. The iTunes Twitter and Facebook pages are promoting it as well.

The world-premiere screening of “I Kissed a Vampire” had been planned for the Apple Store in Soho on Oct. 13, but it has outgrown that venue and been moved to the Landmark Sunshine Cinema. The three teen stars are expected to attend.