Film production may be stalling in Los Angeles, where filming is down more than 56 percent in the first three months from 2008. But it’s blossoming once again here in Vancouver, where film and TV crews are almost as ubiquitous as looming Grouse Mountain.

The worldwide recession is a faint echo among the TV and movie crowd of Hollywood North, where production activity is running well ahead of last year.

Here’s how film and TV production broke down year-over-year for April, according to  the British Columbia Film Commission:

And though the industry was hit by the closures and uncertainty of last year’s writer’s strike and declining domestic production, that was almost $205 million over 2007.

Peter Leitch, chairman of the Motion Picture Production Industry Association of B.C., was cautiously optimistic about a repetition of 2008 spending. “We’re well on pace to meeting that or surpassing that,” Leitch told TheWrap. “It’s almost still too early in the year to tell, but our facilities are full, and we’re busy.”

A couple of major factors are helping revive Vancouver while L.A. continues to languish, including the extension in February of British Columbia’s TV and film tax credits and the decline in the Canadian dollar’s value since last year’s spike.

The city’s triple threat of a favorable currency exchange, strong tax credits and established infrastructure may not be sexy, but it is proving highly effective.

On a bright sunny April day, cameras are loaded and equipment trucks are emptying out all over town. In front of the imposing columns of Art Gallery on Georgia Street, crews hustle inside with light rigs as craft services start laying out plates for lunch.

Over the Burrard Street Bridge, on the west side of town in front of the Ridge Theater, fans start Twittering away as Taylor “Jacob” Lautner and other cast members of the “Twilight” sequel “New Moon” are spotted in and around the art-house movie theater as shooting gets set up.

Stalwarts like “Battlestar Galactica” and “The L Word” may have come to an end and left town, but there’s more than enough to take their place — not just “New Moon” but the CW’s “Supernatural,” the Chris Columbus-helmed adaptation of “Percy Jackson,” the recently renewed “Psych,” the recently relocated J.J. Abrams’ series “Fringe” (starring Vancouver’s own Joshua Jackson) and Disney’s “Tron2.” 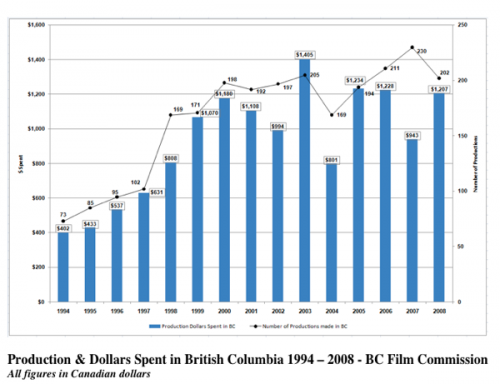 That’s a long way from when “21 Jump Street” and later “The X-Files” were the biggest game in town, and it might get even better soon. “When the new TV announcements are made in May, we’re pretty positive that we’ll see even more productions up here,” said Leitch, who runs production facilities at Mammoth Studios and North Shore Studios. “We’ve had good indications that we will.”

“We have tested crews, over a million square feet of stage space, we’re in the same time zone as L.A. and we’re only two hours away,” B.C. Film Commissioner Susan Croome told TheWrap. “We have diverse locations from the desert, the mountains, the city that can play as any city and the growth forests. We have labor-based tax credits that are competitive, and they are steady, sustainable and predictable.”

The wild card for Vancouver, like all Canadian locations masquerading as “Anywhere, U.S.A.,” has been the fluctuating dollar. Primarily because of Chinese foreign exchange diversifications, the Canadian dollar started picking up currency steam in the fall of 2007, hitting par with the U.S. and, for the first time in 30 years, closing above at $1.0052 on Sept. 28 of that year.

The historic heights continued for several months into 2008. Today the loonie, as the Great White North currency is known, has settled back at about 81 cents for every greenback — which is a very good proposition for production. “The industry is always going to chase the lowest production costs,” said Kirk Shaw, president of Insight Film Studios, one of Canada’s largest production companies.

In that environment, the first- and second place finishers — Los Angeles and New York — are feeling the heat.

Last month, the L.A. City Council passed an industry-lobbied incentive-and-ease package designed to encourage more production in the city. In a town wounded by studio layoffs, there are only three blockbuster budgeted films scheduled to shot locally this year, as opposed to 21 last year. (Click here for production in L.A.)

“Ugly Betty” jabbed L.A. production when it left to film in NYC last year but the Empire State has taken some serious body blows itself. Besides losing big budget features like “Percy Jackson,” there has been a plunge in production because of high costs only partially mitigated by extended tax credits. Last year, 19 pilots were filmed in New York. Even though Albany extended its tax credits by a year last week in the state budget there wasn’t a single pilot being shot in the state.

While other jurisdictions on both sides of the border jockey to attract production, Vancouver industry insiders believe they still hold the perfect hand.

“I think Manitoba will get a certain amount of productions based on their tax credits,” points out Leitch, “and while our credits may not be the lowest, they are bankable and we offer… more infrastructure and post-production and a true cost-effectiveness that few states or provinces can match.”

Having just stepped out of watching dailies for “Percy Jackson,” Michael Barnathan, agreed. “The truth is the infrastructure and the facilities in Vancouver are great and the tax incentives are consistent and strong,” said the producer, who hopes to repeat his success on the “Harry Potter” films with this possible new franchise when it hits screen next February. “As long as we can get that 25 percent savings on the currency, and it doesn’t fluctuate too much, Vancouver is perfect.”

Which just might be why Vancouver might find itself reaching for the Gold soon — and not because the city is hosting the Winter Olympics next year.