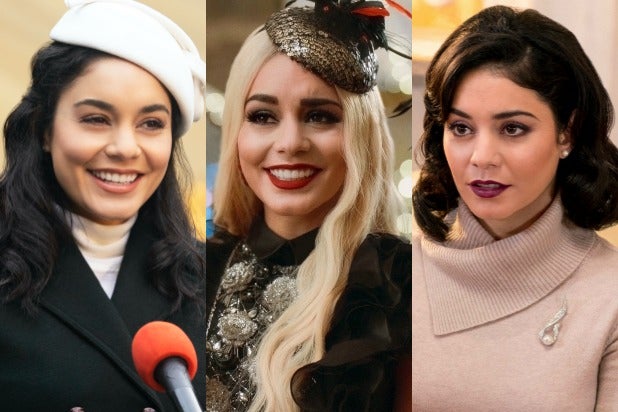 “The Princess Switch” fans will be seeing triple when the Netflix original holiday film’s sequel launches Thursday. But that’s as far as the franchise will be going with its gimmick of having star Vanessa Hudgens play multiple characters, even though a third film has already been greenlit by the streaming service.

“No, no, that’s just too outrageous. We’re already at max outrageous here with three characters, we’re just going to keep it at that,” Hudgens told TheWrap, speaking about plans for “The Princess Switch 3,” which will begin production in Scotland later this year for a holiday 2021 release. “And I would 100% lose my mind if I tried to add another me, even though it would probably be Scottish [and] I love that accent and it would be a great excuse to master the Scottish accent. But no, that’s not happening.”

In “The Princess Switch: Switched Again,” the sequel to Netflix’s 2018 film starring Hudgens and Hudgens, you’ll see the “High School Musical” alum reprise her roles as Chicago baker-turned-princess Stacy and her royal lookalike, Duchess Margaret of Montenaro, while also taking on the new part of Margaret’s outrageous party girl cousin, Fiona, who is (obviously) the spitting image of both Stacy and Margaret.

“It definitely had its moments of frustration,” Hudgens said of “The Princess Switch 2,” which will follow Stacy and Margaret as they switch again, while Fiona hatches a devious plan against them. “But what do you expect when you’re playing three characters?”

Along with leading both “Princess Switch” films, Hudgens starred opposite Josh Whitehouse in Netflix’s 2019 holiday movie “The Knight Before Christmas.”

Yes, Vanessa and Netflix are sitting in a Christmas tree, pretty much K-I-S-S-I-N-G.

“I love it. It makes me so happy,” the actress said. “I think especially with this year, more than ever, 2020 has been such a rough year for us all and we all deserve a break. And what’s better to take a break with than a holiday film that makes you feel warm and fuzzy inside and forget about your worries and woes of this entire year, for a moment at least? I love holidays, I love bringing people together, so it makes me happy! And I love Netflix, so it’s like a win-win.”