The British Academy of Film and Television Arts has selected actress Vanessa Redgrave to receive BAFTA’s highest honor, the Academy Fellowship.  The award will be presented on Sunday, February 21 at the Orange British Academy Film Awards in London.

In the press release announcing the award, Redgrave said she was particularly pleased because the first recipient of the award was Alfred Hitchcock — and Redgrave’s father, actor Michael Redgrave, made his first film with Hitchcock.  (The movie was "Secret Agent," in 1936; Redgrave’s first credited role came two years later in another Hitchcock film, "The Lady Vanishes.") 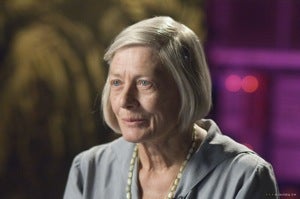 On Sunday 21 February, the British Academy of Film and Television Arts will present Vanessa Redgrave with the Academy Fellowship at the Orange British Academy Film Awards ceremony at London’s Royal Opera House.

David Parfitt, Chair of the Academy said: “We are absolutely thrilled to be awarding the fellowship to Vanessa. She is a hugely talented and respected actress who has served as an inspiration to the British film industry.”

Vanessa Redgrave adds: “I’m truly delighted, it’s such an honour to be recognised in this way. Looking through the list of past recipients shows what a wonderful accolade this is, and the fact that Alfred Hitchcock was the very first recipient makes it even more special, as my father made his first film with him.”

One of the most celebrated actresses of her generation, Vanessa has enjoyed a successful career, spanning six decades: she has received great acclaim for her work on stage, television and film, with countless BAFTA, Oscar, Tony, Golden Globe and Emmy nominations for her varied range of roles.

Vanessa studied at the Central School of Speech and Drama, and first enjoyed worldwide critical acclaim in 1967 with Morgan: A Suitable Case for Treatment, which brought Vanessa her first BAFTA nomination along with the first of six Oscar and eleven Golden Globe nominations. This was followed up with more awards acclaim for her performances as the title roles in Isadora and Mary, Queen of Scots. Having received the Actress Award from BAFTA in 1966, ten years later, Vanessa won the Best Supporting Actress Oscar for her role in Julia. And, in 1987, a BAFTA Actress nomination in the Actress in a Supporting Role for Prick Up Your Ears.

Recent work includes the 2002 miniseries The Gathering Storm, for which Vanessa was BAFTA-nominated, Joe Wright’s Atonement and Venus, alongside Peter O’Toole and Leslie Phillips. The past decade has seen Vanessa enjoy particular success on stage. Her role in Joan Didion’s one woman play The Year of Magical Thinking brought great acclaim in both London and New York, where her performance attracted a Tony nomination in 2007, an award she had won three years earlier for her role in Eugene O’Neill’s Long Day’s Journey Into Night.

Future film projects include Letters to Juliet with Amanda Seyfried and Gael Garcia Bernal, and The Whistleblower with Rachel Weisz and Monica Bellucci.

The Orange British Academy Film Awards will be hosted by Jonathan Ross and broadcast on BBC One from 9pm on Sunday 21 February. A Red Carpet Special hosted by George Lamb will be on BBC Three from 7.30pm.

Morgan: A Suitable Case for Treatment (1966)